Four bent policemen chose the wrong person to extort in an e-cigarette bust in Pattaya.

The victim turned out to be the son of a senior police colonel in the northeast of Thailand.

After he was picked up and 40,000 baht was demanded he was released and went straight to the Pattaya police.

Now the chief of the Chonburi provincial police has ordered that the book is thrown at the bent cops.

He said that he had been contacted by a man to meet him at a South Pattaya gas station as he wanted to buy two sets of e-cigarette smoking materials. A price of 1,250 baht was agreed.

It turned out to be a police sting. Four men who identified themselves as Region 2 police (Division 4) bundled him into a black Toyota police pick-up and drove him away.

On the journey, one in the pick-up said that they would release him if he paid them 40,000 baht.

Phanuwat said he didn’t have that kind of cash and it was agreed that he would hand over his one baht weigh gold bracelet (worth about 20,000 baht) and 5,000 baht in cash.

Phanuwat’s claim that they were police was investigated as CCTV was examined at the sites of the alleged extortion.

It turned out to be completely true. A police captain was in charge of the four men.

Daily News reported that Phanuwat is the son of a police colonel who is a deputy commander in Isaan.

Phanuwat was previously charged with selling electronic cigarettes back in September 2016. 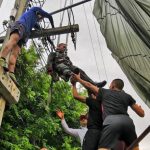