A foreign women has gone viral on Thai social media after claims she was possessed by a vegetarian goddess at a Chinese shrine.

A video of what has been described as a foreign woman being possessed by a goddess related to the Phuket Vegetarian Festival at a Chinese shrine has been circulating on Facebook.

The video shows the unidentified Caucasian woman shake her head with eyes closed at Phuket’s Put Cho Chinese Shrine on Saturday night — an action that led some Thai netizens to believe she was possessed by a Chinese goddess.

There is no mention made of who the woman was or where she came from.

Suthicha Suthakon, who recorded and posted the one-minute video, told the Phuket News: “At 11pm, the woman was shaking her head. This happened when the worshippers gathered to send the Phuket Vegetarian gods back to heaven, marking the end of the festival.”

“I know that this happens when someone gets possessed by the gods,” she said, adding it is rare to see a foreigner “chosen by the gods.”

Suthicha said that a medium at the shrine, known as mah song, believed the woman had been possessed by “the third Goddess of seven.”

Well, sure. Maybe. Actually, we’re kind of leaning toward “not.”

So what do you think? Possessed or just singing reggae in her head? 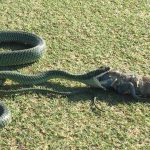 Snake swallows IGUANA on a golf course in Bangkok