It hasn’t been out for 5 minutes, yet a young Thai model has already started abusing the Thai welfare card system, much to the anger of the Thai social media.

A male model looks as if he’ll be bounced from Thailand’s social welfare rolls after he enraged netizens by posting a snapshot of his welfare card — neatly placed under a G-shock watch and a fancy coffee that costs half of what Thai minimum wage earners make in a day.

Enraged Twitter users have been all over 26-year-old model Wachrin Tankuranan since Sunday, making his story the most popular hashtag on the web since. Irked by what sure seems like a freeloader, netizens have dug deep into the model’s Instagram account, where — whaddya know! — he has regularly posted photos of himself dining at fancy restaurants, using Apple gadgets, toting designer products, and drinking Starbucks coffees.

And yet he’s on welfare. In a country where the daily minimum wage ranges from just THB308 to THB310 (about US$10), depending on the province.

In response to the Twitter drama, the model insisted that he really is poor, adding that most of the fancy stuff he posts on social media belong to his friends.

“About Starbucks, sometimes my friend would invite me for a coffee. Sometimes I don’t have to pay for it because I go with my friends. Everything belongs to them,” Wachrin told Amarin TV.

“I only posted nice photos on Twitter and Instagram because everybody does that. I insist that I don’t have any assets,” he said.

Worse, some months he doesn’t earn any money at all.

“I review products for a living. My income is not guaranteed. Some months, I don’t have any income at all, and sometimes I only get to use the products for free.

Got it. Just a regular poor person and not-at-all handsome male model who likes posing with nice things that all belong to his friends. Mmm hmm.

Sutthirat Rattanachote, director-general of the Comptroller General’s Department, said she has been notified of the situation and will investigate the model in question. If they find that Wachrin is not qualified for the program, his welfare card will be cancelled.

In early October, the government handed out welfare cards to seven million low income earners. To be qualified for social welfare, they cannot earn an annual salary of more than THB100,000 ($US3,000), have less than THB100,000 in their bank account, and cannot own any real estate.

The card contains a monthly budget of THB1,700-THB1,800 (about US$50) for Thais to pay for groceries, water bills, and transportation fees. 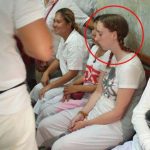