A week ago, this photo of a foreign man on a roadside with Thai flags appeared on Twitter with the caption, “This farang at Sri Ayutthaya junction hands out flags to the cars stuck in traffic with a small piece of paper.

Every car would return the flags to him. I’m not sure if he’s trying to sell the flags”.      Well, if every car gives them back, it’s probably a safe bet that he’s trying to sell them. Today, a similar photo of a young, attractive, smiling, white blond woman appeared in the Bangkok Post with the caption, “A Western woman sells miniature national and royal flags at an intersection near the Customs Department in Klong Toey district. She hands potential buyers a note saying she is deaf and trying to raise money to buy a hearing aid. Concerns have been raised over whether she is breaking labor laws by selling the flags without a work permit”.

Hmmm, her routine of handing a note with the flag sounds very similar to the routine of the man in the photo above. Could they both be deaf? Popular blogger Richard Barrow in Thailand shared the Bangkok Post’s photo of the woman. Commentators seemed to believe she was scamming. Some noted that, if she is European, she could likely get a hearing aid for free in her home country. Selling the flags of a country not their own seems to be a new way for foreign begpackers to raise money on the street. It seems like another way to play on the heartstrings of generous and patriotic Thais.  Source: Coconuts Bangkok 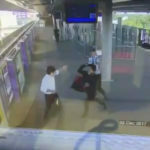 MRT Attack: Man attacked with a belt in MRT Station