Home » Fake bills update: Even 20 THB bills are being replicated.

A convenient store owner in Surat Thani province is the latest victim in the fake bill scam. Gotnich Petchsriknam 33 years old the owner reported that she was paid with a 20 THB bill. Where at first she was skeptical on whether the bill was fake because it usually fake bills are in the form of 500 THB and 1,000 THB bills.

Gotnich showed the 20 THB bill that was separating from each other as it was made from two printed papers stuck together with glue. She stated that the convenience store has been opened for 3 years, where this is her second time receiving a fake bill in her shop from a customer. The bill was paid to her by a homeless man who regularly came in to buy items from her shop. The homeless man does not work and asks for money from the local villagers. 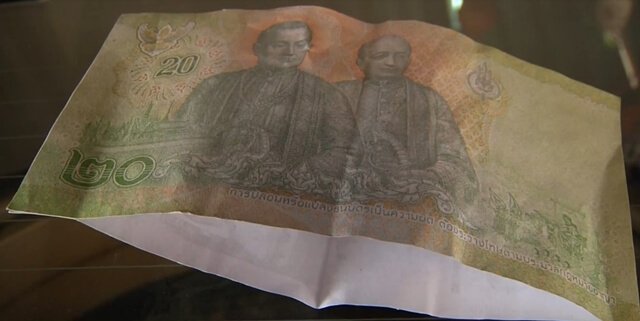 Gotnich does not want to press any charged on the man as she feels sorry for him and stated that he seems to not be in the normal state of mind and might not realize that the bill is fake. It is estimated that the bill might have been given to him by someone else.

Gotnich wants to warn other sellers and shop owners of the fake bill scam. Where you should always look carefully and feel every bill that you accept, even if it’s only 20 THB. In this case, Gotnich was lucky to be paid with a fake 20 THB bill because if it was a 1,000 THB bill then not only will she not receive any money but will be losing money from giving the customer back for the excess amount paid.

Norwegian fell from a 4 story building undiscovered for hours.

WHY THAI FANS ARE ALL ABOUT MISS UNIVERSE ALBANIA