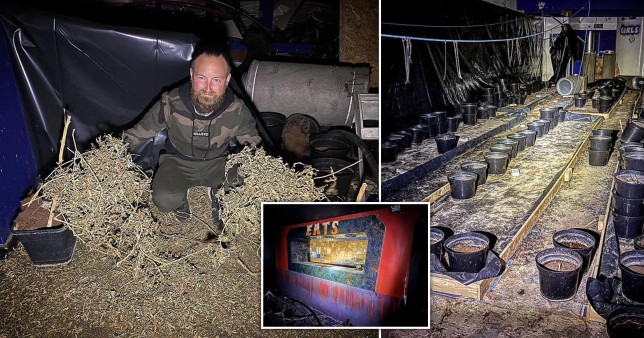 This is the moment an urban explorer stumbles across a huge abandoned cannabis farm in a disused Gloucester nightclub.

Colin Smith, from Hampshire, says he was driving home from Wales when he decided to drop in on the old club.

Footage shows hundreds of empty pot plants and mounds of marijuana shaving inside, along with the eerie leftovers from the venue, including fridges for VKs.

Colin, 36, was stunned by the find, which came after police raided the building, situated nearby a station.

Equipment used to grow the drug and countless plants can be seen scattered across the  floor.

The former plumber and now full-time urban explorer, known as ‘The Bearded Explorer’ on YouTube, entered the building through one of the many wide-open doors.

He discovered flyers for bygone events, drink and food menus, a kitchen full of cutlery and glasses and oddly peeling paint.

Exploring the two main dance floors and the upper floor of the nightclub, the explorer also found three locked safes, empty money bags and a cloakroom.

But on entering the basement however, Colin was shocked to find the remnants of a cannabis farm, complete with broken strip lighting and over 300 rotten plants.

There was also a bed and clothes left behind.

Colin, who uploaded the video on Thursday, May 6, explained: ‘I was on my way back from another exploration in Wales and I had been told about this place in Gloucestershire, so I pinned it on my map and drove to it. ‘

The doors were all open, so I literally just walked in.

‘There was still loads of memorabilia including restaurant menus, promotion flyers, drinks and all of the standard stuff you would expect to find.

‘I saw lots of strip lighting left dumped in one of the upstairs rooms and thought ‘that’s a little bit strange, why are these in here?’ He continued: ‘

It wasn’t until I went downstairs to the ground floor and opened the door to a huge back room when I came across the huge haul of old cannabis plants. ‘

The guys that were doing it were obviously living on site because they had a bed area and their clothes were all still hanging up.

‘The amazing thing is that it was just across the road from a police station. ‘

Whoever was growing it there certainly had some nerve. ‘From my research, I believe the nightclub was raided by the police in 2019.’

The club originally closed in 2009, ten years before the police raid.

But the site is now set to be bulldozed to make way for student accommodation.

Colin said he found it ‘really weird’ that things were left behind in the venue, and that he would have thought police would take ‘everything’ as evidence.

He added: ‘When it was fully functional, I expect the haul could have been worth hundreds of thousands.’

Cannabis is classified as a Class B drug in the UK, with people producing the drug facing up to 14 years in jail. 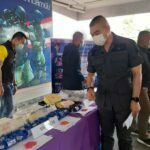 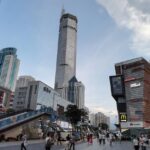