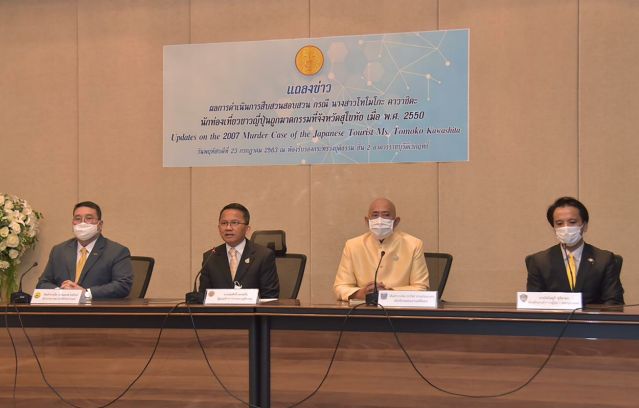 The Department of Special Investigation (DSI) will seek DNA samples from a man in Japan to compare with genetic material found on the clothing of a Japanese woman slain in Sukhothai Historical Park in 2007.

Mr Somsak said the DSI took over the murder case in 2013, but despite their best efforts the investigation ground to a halt six years ago due to lack of evidence pointing to the killer.

The DSI later reopened the case following information that a man who died in 2010 was a suspect in the unsolved murder of the Japanese tourist.

Investigators tried to extract genetic samples from the cremated remains of the dead man for comparison with genetic traces found on the victim’s trousers. They were unsuccessful, the justice minister said.

“The investigators later learned that the suspected man had a son. They then conducted a DNA test on his son for a Y chromosome to establish a father-child link. They also found out the dead man had a half-brother and a nephew working in Taiwan.

“Investigators and forensic experts went to Taiwan to collect DNA samples and Y chromosomes to prove their relationship with the dead man.

“However, they found that the genetic material of the three men did not match with the Y chromosome found on the trousers of the victim,’’ the minister, who is from Sukhothai province, said.

Dr Worawee said investigators had sent the victim’s white short-sleeve T-shirt, long-sleeve brown blouse and blue trousers to the Central Forensic Science Institute for another round of tests.

New procedures using new chemicals found genetic material at 22 places, more than the previous test, which found only 16. This was useful in shedding light on the possible killer’s identify, he said.

Forensic experts from several agencies shared the same view, that those genetic traces pointed to a Japanese or Korean person, Dr Worawee said.

Pol Lt Col Korrawat said DSI investigators were working closely with the Japanese embassy. It was hoped Japanese authorities would get court approval to ask another man in Japan to give a DNA sample for comparison with the genetic material extracted from the victim’s clothing.

“On top of this, the investigators will further investigate whether other Japanese, or Korean, nationals visited Sukhothai Historical Park on the day the crime occurred,’’ the DSI director-general said.

Kowashita, 27, arrived as a solo traveller in Thailand and visited Sukhothai for the Loy Krathong festival on Nov 24, 2007. She was found stabbed to death and robbed near Wat Saphan Hin in Muang district of Sukhothai the following day.

Her parents have made several visits to Thailand, offering a reward and imploring investigators to continue their efforts to bring her killer to justice.

US embassy greets HM the King on 68th birthday

Thai ‘intellectual’ says NO TOURISTS for at least 6 months