Passing drivers had to stop and catch a 10ft long PYTHON after it was seen swimming through a storm drain at a petrol station.

The long snake was spotted lurking at the side of the Shell garage in Bangkok on Saturday morning at 9am.

One brave driver donned wellies and grabbed the beast by the head while motorcycle taxi rider Jakchai Banyensakul who had been filling up at the time helped him.

Petrol station staff looked on nervously as the reptile tried to evade capture.

The serpent was eventually stuffed into an empty sack and taken to the nearby fire station where workers locked it in a cage ahead of a planned release back into the wild later this month.

Jakchai, 44, said: ”I was only filling up my bike, I didn’t think I would be helping to catch a python.

”The snake was so big and it was also near to people. It’s the first time I have seen one crawling through a drain like this. It was not afraid. It was actually trying to bite us. It tried to bite one of the firemen while it was in the cage.” 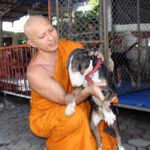