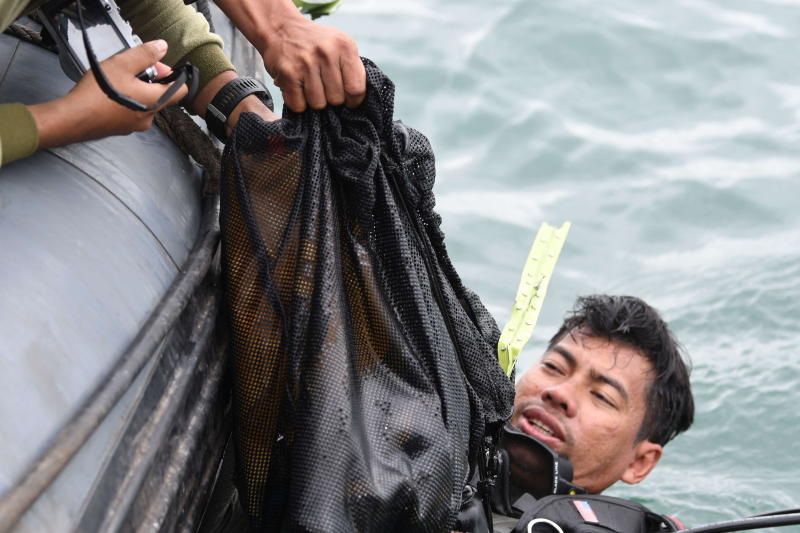 Divers pulled body parts, wreckage and clothing from waters off Indonesia’s capital Jakarta on Sunday, as authorities located the black boxes of the passenger jet that crashed with 62 people on board.

Authorities have pinpointed the location of the two black boxes, they said on Sunday afternoon, referring to cockpit voice and flight data recorders that could be crucial to understanding what happened to the aircraft, which had 62 people aboard.

“We have located the position of the black boxes, both of them,” said Soerjanto Tjahjanto, head of Indonesia’s transport safety agency.

Divers will start looking for them now and hopefully it won’t be long before we get them.”

The Sriwijaya Air Boeing 737-500 went into a steep dive about four minutes after it left Soekarno-Hatta international airport in Jakarta on Saturday afternoon.

A military vessel picked up the plane’s signal, and divers recovered wreckage from around 23 metres below the water’s surface, the transport ministry said Sunday, citing Indonesia’s military chief Hadi Tjahjanto.

It did not specify if the signal was from the downed plane’s voice and flight data recorder.

Indonesia’s President Joko Widodo expressed his “deep condolences”, and called on citizens to “pray together so that victims can be found”.

But the frantic search involving helicopters and a flotilla of warships appeared to offer no hope of finding any survivors.

The search and rescue agency said it had so far collected five body bags with human remains as well as debris from the crash site.

A child’s pink clothing, a broken tyre and wheel, life jackets and wreckage from the plane were found, according to authorities and AFP reporters on the scene.

Among the passengers was Beben Sofian, 59, and her husband Dan Razanah, 58.

“They took a selfie and sent it to their kids before taking off,” the couple’s nephew Hendra told AFP.

All 62 people on board, passengers and crew, were Indonesians, including 10 children, authorities said.

Flight SJ182 was bound for Pontianak city on Indonesia’s section of Borneo island, about 90 minutes flying time over the Java Sea.

“I have four family members on the flight — my wife and three children,” Yaman Zai said as he sobbed.

“(My wife) sent me a picture of the baby today… How could my heart not be torn into pieces?”

The plane crashed near popular day-trip islands just off the coast.

Data from FlightRadar24 indicated that the airliner reached an altitude of nearly 11,000 feet (3,350 metres) before dropping suddenly to 250 feet. It then lost contact with air traffic control.

The transport minister said Saturday that the jet appeared to deviate from its intended course just before it disappeared from radar.

“But it’s way too early to conclude anything,” he added.

“After the black box is found we can start putting the puzzle together.”

Sriwijaya Air, which operates flights to destinations in Indonesia and Southeast Asia, has said only that it was investigating the loss of contact.

It did not immediately comment when contacted by AFP again on Sunday.

That crash — and another in Ethiopia — saw Boeing hit with $2.5 billion in fines over claims it defrauded regulators overseeing the 737 Max model, which was grounded worldwide following the two deadly crashes.

The 26-year-old 737 that went down Saturday was not a Max variant.

“Our thoughts are with the crew, passengers, and their families,” Boeing said in a statement, adding that it was in contact with the airline.

Indonesia’s aviation sector has long had a reputation for poor safety, and its airlines were once banned from entering US and European airspace.

In 2014, an Indonesia AirAsia plane headed from Surabaya to Singapore crashed with the loss of 162 lives.

A year later, in 2015, more than 140 people, including scores on the ground, were killed when a military plane crashed shortly after take-off in Medan on Sumatra island.

An Indonesia Navy diver recovers what are believed to be remains from Sriwijaya Air Flight SJ182, which crashed into the sea off the coast of Jakarta, Indonesia on Sunday. (Antara Foto/M Risyal Hidayat via REUTERS) 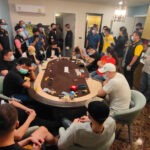 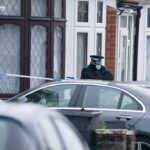