The young man whose body was found hanging in an elevated hut 700 metres from the Lao Phum-Nong Sao rural road in Mueang district, left a suicide note stating that his physical condition made it very difficult to fend for himself and that he did not wish to be a burden to his parents or other relatives.

There was no sign of a struggle or the hut having been ransacked, and a medical examiner estimated that his had died of suffocation two hours before his body was discovered.

His father said he and his wife had been digging over soil to grow yam at a spot 100 metres away from the hut where his, who had been stricken with muscle atrophy at the age of four, was inside alone. When they returned to feed their son, they were shocked to find his body hanging from the beam and quickly took him down, but he was already dead.

The father said his son, who also had asthma and was on medication for psychiatric reasons, received Bt800 a month in disability allowance from the government as he was unable walk or fend for himself.

He often complained about being a burden to his parents, he added. His father said his had previously attempted to commit suicide three times, twice by overdosing on medicine and another time by trying to drown himself in a well, but had been saved in the nick of time on each occasion. 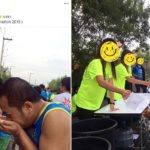