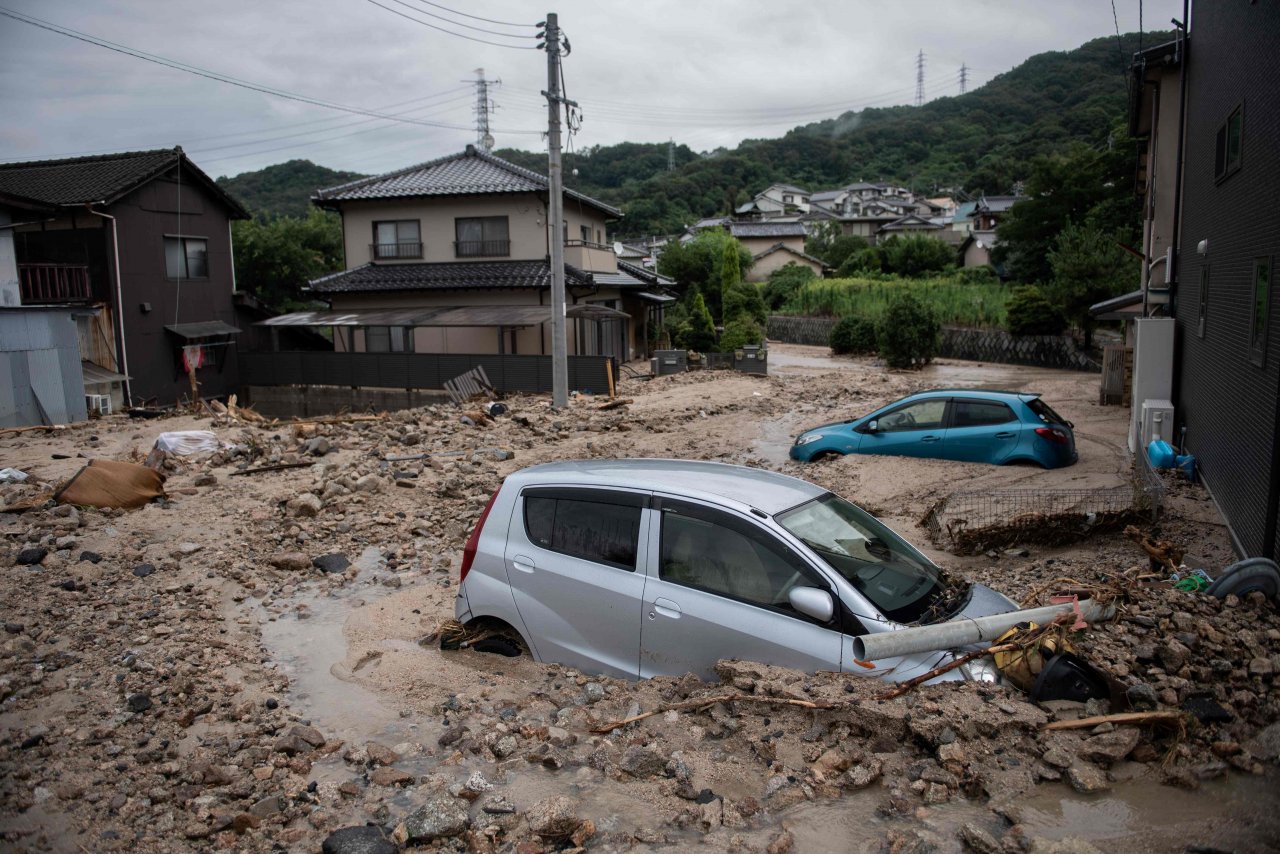 And the death toll was expected to rise further, with local media reporting nearly 90 people killed and over 50 others unaccounted for.

The rains are the deadliest weather disaster in Japan since two typhoons that hit back-to-back in August and September 2011, killing nearly 100 people.

By Monday morning, the downpours had mostly ended across the worst-affected parts of central and western Japan, where entire villages were engulfed by flood waters or sudden landslides.

The meteorological agency downgraded its alerts for affected areas, but authorities warned that the risk of fresh landslides caused by rain-loosened earth remained high.

In the town of Kumano in Hiroshima prefecture, rescue workers were still digging through the dirt of a landslide that enveloped homes over the weekend, crushing some into little more than scrap wood.

Desperate family members of missing locals waited nearby for word of their relatives.

The nose of a white car was just visible underneath the entire top floor of one home that had been torn from the rest of a building and swept down a hillside.

More than 54,000 emergency workers, police and troops have been deployed to help people, with the Self Defense Forces dispatching several planes to help airlift residents to safety.

‘The area became an ocean’

In Okayama prefecture, rescue workers flew in helicopters over areas that are still under flood water and otherwise unreachable, looking for signs of life.

“As far as we could see from the helicopter, no-one is now waving for help,” a rescue worker from Kurashiki city told AFP.

Local government officials said pumping trucks were being deployed to help restore access to some of the worst-hit areas in the area, and with the rains stopped, water was starting to recede.

“Rescuers had to go by boat yesterday due to flooding but water is gradually receding today. If the water level drops low enough, they may be able to access hard-hit areas by road or on foot,” a spokeswoman at the area’s disaster control office said.

“It’s not raining today but we must stay alert for the possibility of landslides,” she told AFP.

At one point around five million people were told to evacuate, but the orders are not mandatory and many people remained at home, becoming trapped by rapidly rising water or sudden landslides.

In the town of Mihara, roads were transformed into muddy flowing rivers, with dirt piled up on either side as flood water gushed around the wheels of stranded cars.

Several dozen Mihara residents ventured down from shelters on Sunday to inspect the damage to their homes in the Hongo district of the city, where many locals are rice farmers.

They found the flood waters had engulfed their rice fields and homes alike.

In the town of Saka, Eiichi Tsuiki opted to stay in his home, and survived only by moving to the top floor as flood waters rose, washing cars away outside.

Authorities said high temperatures were forecast for Monday, posing new challenges for the many people stuck in modestly equipped shelters with few possessions or damaged homes with no water or electricity