A Singaporean woman was sentenced to 33 months in jail Friday for her role in a massive bribery scandal dubbed the “Fat Leonard” case that rocked the US Navy.

Gursharan Kaur Sharon Rachael, 57, a former lead contract specialist with the US Navy, was charged at a district court in the city-state in late 2015 for leaking confidential information in exchange for cash and luxury vacations.

She had been giving the information to Malaysian businessman Leonard Francis, who ran a port services firm called Glenn Defense Marine Asia (GDMA).

The portly, Singapore-based Francis — dubbed “Fat Leonard” — had admitted to plying officers with cash, booze, prostitutes and other perks to ensure US Navy ships stopped at ports where his firm operated.

Twelve US Navy officers had pleaded guilty in the United States to charges relating to their roles in the scandal, with nine of them sentenced to various jail terms and fines.

One of them was retired rear admiral Robert Gilbeau, who became the higest ranking US Navy officer to be convicted in the probe and was jailed for 18 months.

US prosecutors said Francis had supplied Gilbeau with prostitutes and paid for his stay in a fancy hotel.

Singaporean state prosecutors said Gursharan “leaked confidential contract information to Leonard in exchange for over Sg$100,000 (US$73,000) in cash and luxury vacations in Bali and Dubai”.

Specifically, information leaked by Gursharan was linked to 16 US Navy contracts, out of which GDMA won 11 worth US$48 million, the prosecutors said.

Gursharan “played a pivotal role in Leonard’s web of corruption,” they said.

According to US prosecutors, Francis had picked up the tab on widespread debauchery including a May 2008 “raging multi-day party, with a rotating carousel of prostitutes, during which the conspirators drank all of the Dom Perignon available at the Shangri-La” hotel in Manila at a cost of more than US$50,000.

In one port visit by the USS Blue Ridge in 2007, historical memorabilia in the MacArthur Suite at the Manila Hotel related to legendary US General Douglas MacArthur “were used by the participants in sexual acts”, the indictment stated.

May thanks Brexit minister for service after his resignation 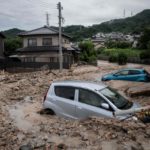