Not-so happy ending: Inside a deserted six-storey Bangkok brothel which lies abandoned after the owners fled Thai crackdown on the sex industry.

It was once one of the biggest brothels in all of Bangkok – a six-storey pleasure palace where dozens of girls worked every night entertaining hundreds of clients who described it as ‘pure hedonism’.

Dubbed Ocean Massage, the building included a nightclub, a coffee shop, an outdoor pool, gym, sauna and more than a hundred rooms with double beds, hot tubs and baths for girls to entertain visitors.

But the huge venue was abandoned last month after police raided the parlour next door in the midst of a crackdown on the sex trade in Thailand, and the owners of Ocean Massage feared they would be targeted next.

They fled in such a hurry that baby oil, talcum powder, make-up and perfume have been on shelves while dressing gowns and towels are still on some of the beds.

Footage from inside the abandoned building shows a large spiral staircase leading up to the private rooms – each decorated with huge posters of women in bikinis.

A large Japanese tree decorates a staircase while flowers are still laid out next to a jacuzzi in the gym and among the bedrooms previously used by young prostitutes.

The vast building – a labyrinth of VIP rooms for different services – even includes a covered car-park below rows of rooms. The sheer size of the complex gives an insight into how busy the venue once was – recently rebranding from Colonze 2 to Ocean Massage – with many similar outlets earning hundreds of thousands of pounds a week.

But over the last year, the multi-storey massage parlours have been targeted by the Thai government which is desperate to transform the country’s seedy image as the sex capital of the world.

The filmmaker, who wished to remain anonymous, said: ‘This place used to be one of the big ‘entertainment venues’ in the area.

‘A few years ago it was full of life. Dozens and dozens girls working every night, walking around in the building in bikinis. Pool parties, bands, alcohol. A snooker table.

‘But the place changed its name, changed owners, went down hill and the building was so big that maintaining it was hard. You can see from the pictures some of the rooms had gone to rack and ruin.

‘It was open until mid-way through January. The people running it decided to cut their losses and leave. The sex industry’s days are numbered, certainly in terms of how it once was and for these kind of ostentatious places.

‘Right now there are a few workers there every day stripping the metal from the building, salvaging whatever value is left.’

The Victoria’s Secret massage parlour was raided on January 12 and more than 100 women who worked there were rounded up. It was the latest in a string of raids over the last year targeting the sex industry.

The operation exposed the illegal hiring of minors and migrant workers for prostitution and led to allegations of systemic bribery and corruption involving police and high-ranking officials, according to the Bangkok Post.

The Thai Department of Special Investigations said the massage parlour was making 50 million baht (£1million) a month with vast sums being paid to corrupt police.

The bosses of the Ocean Massage parlour are are understood to have been tipped off about the police raids and fled before officers had the chance to investigate the venue.

Other recent raids on brothels in Bangkok include The Lord Hotel And Spa and Nataree Massage, with more expected throughout the year. 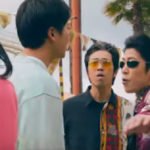