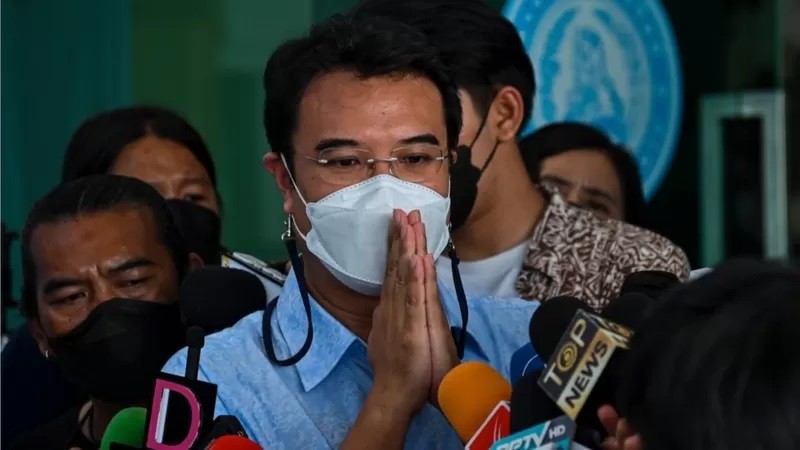 A deputy leader of the Democrat Party, Prinn Panitchpakdi, announced his resignation from all posts in the party today (Thursday), as he categorically denied multiple allegations of sexual harassment on social media.

In a press conference held this afternoon, Prinn admitted that he is shocked by the allegations, but insisted on his innocence.

“This is not true. People who know me also know that I am not that kind of person (who sexually harasses women),” said Prinn.

He said that the unfounded allegations have affected his responsibilities and activities in the party, so he decided to quit to spare the reputation of the party and that he will defend himself in the court of law.

The young Democrat admitted that his parents are concerned over this controversy, but he declined to offer any more detail, saying that he will talk directly with officials concerned, so as to allow the case to run its course within the justice process.

Asked by journalists about a report that he had phoned the mother of an alleged 18-year old victim of the alleged harassment for an appointment at an unnamed restaurant, Prinn said that he did have an appointment with the woman, but insisted that the restaurant was crowded with many other customers at the time.

Without naming names, a self-proclaimed “people’s lawyer”, Sittra Biabungkerd, said in his Facebook post that several women had approached him seeking legal help, claiming that they had been sexually harassed by a deputy leader of a political party over several years.

He also claimed that the deputy party leader in question had already contacted the family of one of his alleged victims, but was not sure whether a complaint had been lodged with the Lumpini police station.

Earlier today, Democrat party spokesman Ramate Rattanachaweng admitted that he knew nothing of the alleged scandal involving a deputy leader of the party, when he was approached for comment, but added that no one is above the law and that the law should be allowed to run its course.