Hankey, 54, appeared at Warrington Magistrates’ Court on Thursday charged with intentionally touching a woman over the age of 16 on September 10 last year.

District Judge Nicholas Sanders adjourned the case to Chester Crown Court where Hankey will be sentenced on May 12.

Hankey was released on bail after being charged by Cheshire Constabulary last month.

The authority subsequently released a statement, which read: ‘The Crown Prosecution Service has authorised Cheshire Constabulary to charge Edward Hankey with the sexual assault of a woman.

‘The CPS made the decision to charge the 54-year-old after reviewing a file of evidence from Cheshire Constabulary.

‘The charge relates to an incident that occurred in Cheshire in September 2021.’

Hankey, whose nsickname is The Count, is a two-time BDO world professional darts champion.

In December it was announced that Hankey was withdrawing from the world seniors darts championship, held in February. 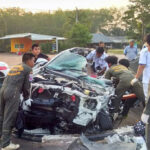 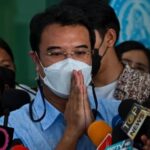