Thailand’s Public Health minister, ordered preventive measures against dengue fever as the cumulative number of dengue infections has reached nearly 50,000 cases since the beginning of this year.

There were reports of 4,503 dengue fever patients last week, bringing this year’s cumulative cases to 49,174 cases with 64 deaths.

It is estimated that the number of patients could reach 130,000 cases for the entire year.

The minister ordered that the disease surveillance system be put in place across the country. The healthcare sector is required to report the number of new infections to contain the outbreak immediately.

Local authorities and volunteers will spray chemicals to kill mosquitoes and pubic members are advised to destroy mosquito-breeding grounds around their houses.

Since the beginning of this year, 832 dengue fever patients and two deaths were reported in the northeastern province of Loei, ranked the 8th highest dengue patients in all 77 provinces.

Dengue (pronounced DENgee) fever is a painful, debilitating mosquito-borne disease caused by any one of four closely related dengue viruses.

An estimated 390 million dengue infections occur worldwide each year, with about 96 million resulting in illness.

The first symptoms of dengue start to appear from 3 – 14 days after a bite from an infected mosquito. Symptoms can differ in severity for different people.

As with many viruses, early symptoms of dengue fever begin with flu-like aches and pains — particularly in the joints — and a severe headache accompanied by high fever (104 degrees Fahrenheit / 40 degrees Celsius).

The aches and pains are usually followed by swollen glands, nausea, and vomiting. Even when dengue doesn’t turn severe, it can produce fatigue for weeks after exposure. Sometimes patients report severe eye pain 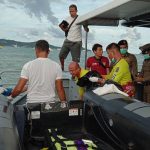 Body of SECOND missing tourist is found in Phuket

Mark KellyFebruary 27, 2020
An American tourist and his Hungarian girlfriend are facing up to five years in a...
END_OF_DOCUMENT_TOKEN_TO_BE_REPLACED