Ivan Rakitic was the matchwinner as Croatia beat Denmark 3-2 on penalties to book a World Cup quarter-final showdown with Russia.

Just hours after the hosts had sealed their place in the last eight on spot-kicks, Croatia followed suit in Nizhny Novgorod as the last-16 round continued to thrill, Rakitic holding his nerve after Nicolai Jorgensen saw his effort saved.

Kasper Schmeichel – roared on by watching father Peter in the stands – had denied Luka Modric from the spot deep into extra-time (116) after Mathias Jorgensen had lunged in on Ante Rebic with the game tied at 1-1.

But Rakitic and Croatia goalkeeper Danijel Subasic spared their team-mate in the shootout as Zlatko Dalic’s side reached the last eight for the first time since 1998.

Mathias Jorgensen had bundled Denmark ahead with just 57 seconds gone, before Mario Mandzukic hit back (4) inside a breathless opening five minutes but a tactical shift from Denmark snuffed out Croatia’s threat until the dramatic denouement rendered their efforts in vain.

There had been late excitement in Moscow as Russia eliminated Spain but here it came during a breathtaking start. Jonas Knudsen’s long throw caused a scramble but Thomas Delaney stayed calm to shield the ball and Jorgensen’s shot rolled over the line via the leg of Subasic and then the post.

Less than a minute had passed but Croatia were quickly level after a comedic passage of play, Henrik Dalsgaard’s clearance knocking colleague Andreas Christensen to the turf and allowing Mandzukic to pounce.

Croatia were now in the groove, repeatedly threatening down the right, and though VAR snuffed out appeals for a penalty when Mandzukic went down under pressure, Rakitic had chances and Dejan Lovren glanced a Modric delivery just wide.

Croatia made nine changes, reverting to the team that swept aside Argentina 3-0. Only Luka Modric and Ivan Perisic remained from the group-stage win over Iceland.

Christian Eriksen slid through a clever ball for Martin Braithwaite and then watched a cross-shot clip the bar but his team-mates had worked tirelessly in the heat and Age Hareide called for fresh legs in Lasse Schone at half-time, as well urging his full-backs on.

With wide threats forced back, Croatia’s rhythm suffered and Braithwaite had a fine opportunity for an increasingly confident Denmark side when he dinked a loose ball beyond his marker only to shank, off-balance, into the crowd.

Substitute Nicolai Jorgensen, teed up by Yussuf Poulsen, shot tamely before Eriksen followed suit but though Rebic fired a reminder after a string of stepovers and Perisic nodded just over, a flat half failed to yield a winner in normal time.

A further barrage of Knudsen balls into the box were unconvincingly repelled as Denmark maintained extra-time momentum and after Schone curled just wide, another Hareide substitute, Pione Sisto, did the same.

Heart-thumping drama came in the closing stages of the added half-hour when Modric played a defence-splitting pass for Rebic and watched referee Nestor Pitana point to the spot when Jorgensen lunged in, but then fired his spot-kick straight at Schmeichel.

Eriksen and Milan Badelj saw their opening spot-kicks saved in the shootout but though Modric made amends, Schone and Jorgensen fluffed their lines and Rakitic had the last word, Croatia underwhelming but reprieved.

Man of the match – Kasper Schmeichel

Danijel Subasic was the winning goalkeeper, deniying Eriksen, Schone and Jorgensen in the shootout but though it will be little consolation, Schmeichel just gets the nod. Epitomising Denmark’s fighting spirit, he held his nerve to thwart Modric deep into extra-time and pulled off his own heroics in the shootout, even if they proved in vain.

Croatia go head-to-head with Russia in Sochi on Sunday (1am kick-off) for a place in the semi-finals. 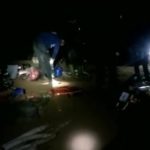 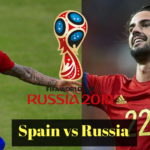