A crazed driver attacked a taxi full of passengers – then smashed its window with a BRICK.

The cabbie had been driving in Cebu City, Philippines, when the grey SUV blocked its path.

An angry male driver then appeared and began kicking the driver’s left hand side window as terrified youngsters sat inside.

The man yells ‘’give me my gun’’ in the native Tagalog language to which the driver replies ‘’what’s the matter with you? What did I do?’’.

The driver – who gave no explanations for the outburst – picked up a brick from the central reservation and shattered the window, sending shards of glass flying towards the front two passengers.

The cabbie suffered cuts on his right hand while the girl filming the attack ran out into the street fearing for her life before the SUV drove away. The footage went viral in the Philippines and sparked a police hunt for the driver.

The girl who filmed it said: ‘’We don’t know what the problem was with the driver. We were in the taxi which was moving slowly in the left hand lane.

‘’While in the right hand lane the SUV appeared and started to shout, complain and scream while revving the engine.

‘’We didn’t know what the problem was and he was trying to force the taxi to the side.

‘’He blocked the path of the car and challenged the taxi driver to get out. Then he started kicking the door.’’

The taxi driver and passenger reported the incident, which happened at 3pm, to police who have issued a summons for the suspect to give evidence. They’re both due to appear later this month. 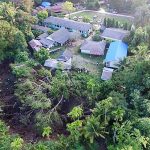 Relocation School away from sinkholes in KANCHANABURI