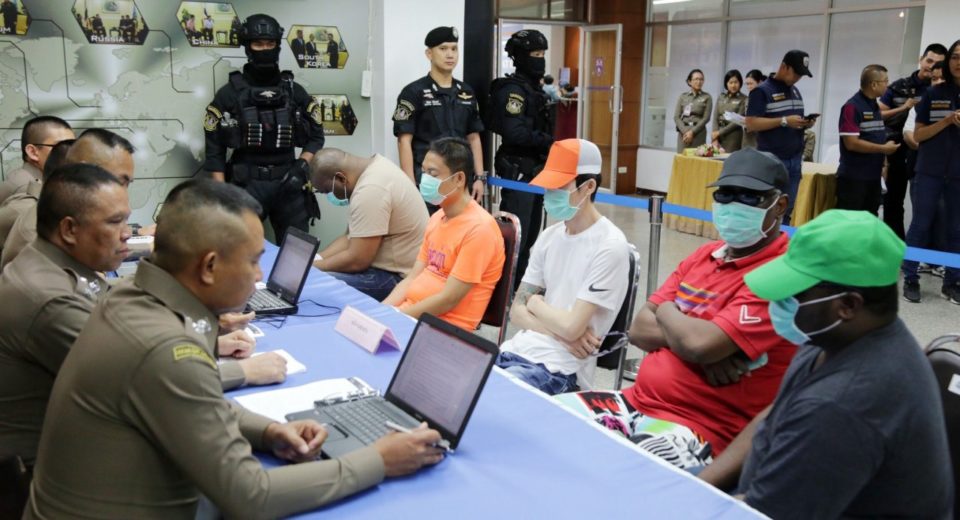 SEVEN foreign criminals have been arrested over the past week in a Thai police crackdown on travel document forgery, fraud and drugs smuggling, Immigration Bureau chief Pol Lt-General Surachet Hakpal said on Monday.

In the first case, a 35-year-old South Korean man, Kim Cheonsu, was arrested last Tuesday by Chiang Rai’s Chiang Saen immigration police over the use of a passport that had been reported as stolen, as cited in Interpol’s Stolen and Lost Travel Documents database.

Officers later learned from the South Korean Embassy that Kim was also wanted on an arrest warrant issued by a court in Incheon on July 2, 2018 for having illegal drugs in his possession with intent to sell and that Interpol had issued a red notice (a request to locate and arrest a named suspect) in relation to that offence. He was also accused of conspiring with others to trade Philophon, a drug banned in his home country and made of methamphetamine and other ingredients. Although an accomplice was arrested, Kim fled to Thailand, where he was finally detained over the stolen passport.

The next person arrested was Italian fugitive Federico Mole, 38, who was wanted in his home country for tax evasion via document forgery resulting in losses totalling 4 million euros (Bt150 million). He was arrested last Thursday at the All Seasons Place office block on Wireless Road in Bangkok’s Pathum Wan district. The man’s visa was revoked and he is currently detained pending extradition to Italy.

The third case involved a 34-year-old Nigerian man, Paul Smith Brown, who allegedly used Thai women to smuggle drugs for delivery to customers in other counties. He was arrested on Saturday along with 324 grams of crystal meth during a police sting operation in Samut Prakan’s Phra Pradaeng district, while he was delivering drugs to a female police informant.

In the fourth case, two Nigerian men – Emmannuel Tochukwu Olisakwe, 55, and Friday Ekene Ochiaka, 41 – were arrested in Bangkok’s Bang Kapi area and accused of sending an email inviting people to wire money to an investment fund. The scam cited the name of a well-known financial institute’s executive to boost credibility. Police found that the two men then wired the ill-gotten money to an accomplice identified as Daniel Abuah – who is still at large and being sought. This case was launched after the executive whose name was used heard through a friend about the scam email and filed a complaint. Besides the charge of fraud, the two Nigerians are also accused of overstaying their visas for nearly two years.

In the fifth case, two Myanmar men were arrested in the Greater Bangkok area for document forgery. A 40-year-old Myanmar man, Myo Htwe, was arrested on Sunday along with some fake passports and forged documents at his rented room in Nakhon Pathom’s Sam Phran district following an allegation that he ran a document forgery service catering to Myanmar immigrant workers. Police also arrested Kap Kyaw, 39, at his rented room in Samut Sakhon’s Krathum Baen district over a document forgery complaint filed by six Myanmar workers after passports they used in job applications were rejected on the grounds that they were fake. The victims claimed to have paid Bt25,000 per head to Kap Kyaw to get the documents.

In a bid to solve the issue of visa stamp forgeries, Surachet said that national police commissioner Pol General Chakthip Chaijinda had already approved a new sharper, more detailed visa stamp design that would come into use along with the stricter immigration law by the end of March.

‘Flying’ motorbike ends up stuck in power lines in Surin

Thais urged to decorate their homes with coronation emblem