A Mexican cowboy sparked panic after riding his horse into a supermarket – to buy a six-pack or BEERS.

The stetson-wearing cattle rancher calmly walked his dapple grey stallion into the the shop in Acapulco, Mexico, on Saturday night at 8pm.

While the sun-burned rider found it funny, the shop’s staff weren’t as keen on their four-legged customer and began pushing him out.

The cowboy – who already seemed to have drank plenty of liquor – asked the cashier to fetch beers for him.

With bemused customers watching, he collected his drinks and pulled back on the reins to guide the horse back out of the Oxxo shop in the Costera district.

Astonished filmer Angel Friiascalderoon said: ‘’What happened was quite amazing, nothing I’ve seen before.

”It was like at 8 o’clock in the night in the shopping mall, and I went with my friends to buy something from the Oxxo shop.

”When we saw the cowboy come in, the truth is that it really surprised us, because this kind of thing is not often seen.

‘’Some people felt scared in case the horse bucked or kicked, but then the rider just went to buy a six pack of beer. The the staff helped him out, took the beers to him and then he left on his horse.’’ 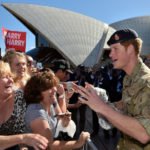