Home » Citizen attacked by Cobra in a police station.

Citizen Attacked: This incident was posted by the Facebook Page “Joh Kao Tua Thai”. The Facebook page posts news and viral stories in Thailand. The post showed the video of a large cobra attacking a male citizen that was at the police station for private business. This helps prove that the police station is not always the safest place to be. 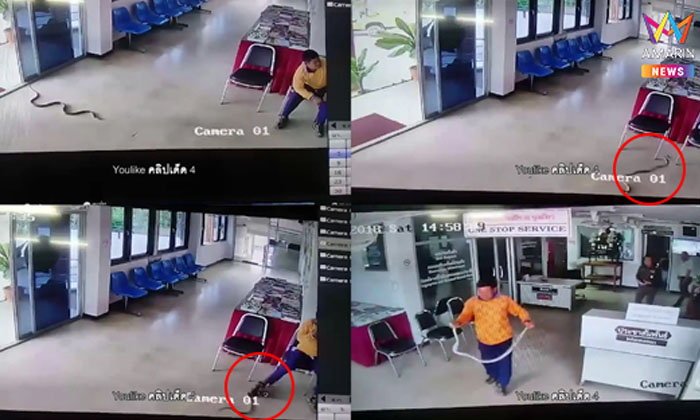 The man was sitting in a chair at the police station waiting for a police officer to come see him. He was wearing a yellow shirt with long jeans and black sneakers. While he was waiting as usual, a large snake estimated to be at least 1 meter long quickly slithered its way towards the man. The snake then suddenly jumped to attack the man who was looking the other way towards the room where the police officer is at, but then luckily he turned his head and saw the snake right before it was going to reach his leg. 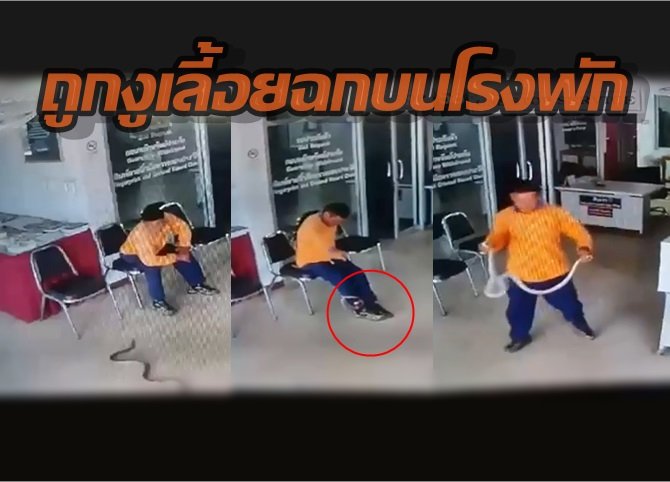 The man’s natural instinct then kicked in as he furiously kicked the snake and continued to step on the snake until the tail and head was under his foot locked in place. The man then used his hands and grabbed the tail then the head of the snake. He then stretched the snake holding it with both hands. The brave man then took the snake to show the police of what had just happen to him.

The police man walks out of his room followed by a man in a white shirt and were shocked at what he sees, he appears to be afraid of the snake and tells the citizen holding the snake to take it away from him. The guy in the white shirt won’t even go near the snake and proceeds to walk towards the another room.

The video was viewed 64,000 times in 3 hours on Facebook. Some commented that the man was extremely brave and that his instinct on how to handle the situation was extremely smart and excellently executed.

Cambodia pickpockets rounded up in Bangkok