Japan has overtaken Thailand as Chinese vacationers’ top choice for the 2018 Chinese Golden Week holiday, according to Ctrip.com, one of the biggest travel websites in China.

This is the first time Thailand has lost its top destination status to Japan for the week-long holiday, during which at least 7 million Chinese travel abroad.

“The number of Chinese vacationers expected to make an overseas trip during Golden Week rises from 6 million during the same period last year,” it was noted on the website earlier this week.

The Chinese Embassy in Bangkok has meanwhile issued a travel advisory for Chinese intending to visit during the holiday week of “volatile weather conditions and high sea waves … in Phuket, Phang-nga and Krabi”.

The southern provinces are the three most popular destinations for Chinese visitors to Thailand.

The advisory is partly in response to July’s tour-boat disaster in Phuket, in which 47 Chinese tourists drowned when their dive boat capsized in rough waters.

But Kongsak Khuphongsakorn, president of the Thai Hotels Association’s Southern Chapter, said the number of hotel bookings by Chinese tourists visiting southern Thailand through Golden Week had risen again to the usual level after a drop of between 10 and 12 per cent last month.

The decline was blamed on the monsoon and initial reaction to the boating tragedy.

Deputy Prime Minister Gen Prawit Wongsuwan said this week he believed the tourism sector would soon return to normal after Thailand sent a formal apology to Beijing following a recent assault on a Chinese tourist at Bangkok’s Don Mueang Airport.

Prawit was asked about a report that China was preparing to “issue a yellow card” to Thai tourism concerning travel safety after a video clip of the altercation at the airport was widely shown on Chinese news and social media.

It showed a security guard briefly scuffling with and then striking a Chinese man. Netizens in China heavily criticised the guard.

However, the Chinese embassy expressed satisfaction with the apology, Prawit said. 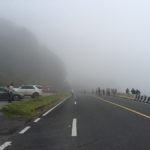 Doi Inthanon finally edges towards first frost of the winter

Seven injured in Bangkok as sleepy motorist ploughs into motorcyclists