A Chinese embassy delegation that visited Phuket yesterday (May 10) to specifically raise safety issues directly affecting Chinese tourists on the island has expressly called for trained, experienced lifeguards to patrol Phuket’s beaches.
Leading the delegation were Zhou Guangxu, Third Secretary and Vice Consul of the Embassy of the People’s Republic of China, and Li Chunlin, Counselor and Consul General from Embassy of The People’s Republic of China in The Kingdom of Thailand.
Also present was Ma Cuihong, who as Deputy Consul-General of the Chinese Consulate-General in Songkhla also heads the Consular Office of the Consulate-General in Phuket.
t the meeting, held at Provincial Hall hall following the delegation’s inspection of lifeguards at Patong Beach (see story here), Phuket Vice Governor Prakob Wongmaneerung explained provincial efforts to improve safety for tourists.
V/Gov Prakob explained the recent crackdown on motorbike rental operators, and that all rental motorbikes must be insured, helmets must be provided to the driver and passengers, and that operators are only permitted to rent out motorbikes to people who have the “correct licence”.
He also explained that tour buses and trucks were not permitted over Patong Hill from 6-9am and 4-7pm* each day for safety, and that signs had been posted to warn of dangerous curves and slopes along the notorious road, and that public transport vehicles, including tour buses, were subjected to more stringent safety checks.
On marine safety, V/Gov Prakob explained the steps taken by local officials in the hope of improving safety on board tour boats and gave a long list of conditions that apparently apply to jet-ski operators, including that all jet-ski rentals must be provided under an agreement written in four languages (English, Russian, Chinese and Thai), that jet-skis are not permitted outside dedicated areas, and that jet-skis are not allowed to be refuelled on the beach or in the sea.
However, several conditions regarding jet-ski operations were related to the delegation that The Phuket News has yet to substantiate, namely that every jet-ski must have “first-class insurance”, must not exceed 130hp and that the rates charged for renting jet-skis must be uniform across all beaches in Phuket.
Regarding lifeguards, according to the official report of the meeting issued by the Public Relations Department, V/Gov Prakob told the Chinese delegation, “The OrBorJor has set that lifeguards must be on 12 beaches and they are hiring 98 lifeguards.”
As widely reported since last year, that is not the case. (See our most recent reports, here and here.)
What V/Gov Prakob did get right is that Patong Municpality has hired their own lifeguards – 26 of them – to take care of beach safety there, though teh delegation had already witnessed that firsthand yesterday morning.
Mr Li diplomatically thanked “Phuket” for taking very good care of Chinese tourists.
“The number of Chinese tourists coming to Thailand continues to rise. Over the past five years we have averaged about 3 million visitors a year, but this year more than 10 million are expected to come,” NK -EP 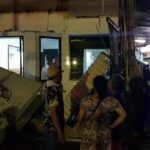