A teenage killer who raped and murdered a little girl was beaten so badly in prison his ‘tooth was through his lip’.

Aaron Campbell, who killed six-year-old schoolgirl Alesha MacPhail in 2018, was hospitalised after being pounced on at Polmont Young Offenders.

The attack happened when his cell was briefly left open during meal time, a prison source told The Sun.

‘The only thing I’m sorry about is that I didn’t get to do it myself.’

The attacker had to be dragged off Campbell by wardens as he delivered vicious blows, according to the prison source.

They said: ‘His door was open and someone saw the opportunity and took it.

‘He pushed Campbell onto his bed and started leathering him and got a good few shots in.

‘Campbell wasn’t expecting it at all, he never said anything.

‘He got rushed to hospital after his front tooth ended up sticking through his lip.’

The attacker is reportedly now being hailed a ‘hero’ by fellow inmates and ‘isn’t bothered’ that he may face a new assault charge.

The source said: ‘Everyone in here is happy, staff have been making sly comments that he deserved it.

‘He’s normally kept apart from everyone in here as everyone wants to hang him.

‘They would kill him if they could because of what he did to that wee girl.

‘But there was a brief chance to get at him and the boy took it. He could get a serious assault charge against him but he’s not bothered, he says it was worth it.’

Campbell is said to have been living in virtual solitary confinement and has been too scared to leave his cell since being jailed for 27 years in 2019, when he was 16.

The sentence was later reduced by three years because of his age, but he will still serve the longest term of detention to be imposed on a juvenile offender in Scotland.

Alesha, from Airdrie, was on holiday visiting family when the teen crept into her home and snatched her from bed in July 2018.

Depraved Campbell, now 20, then raped and murdered her, leaving her body in a hotel’s grounds with 117 injuries.

He warned that the killer would only be released if ‘a lot of work’ was done to change him.

A Scottish Prison Service spokeswoman said: ‘We do not comment on individual prisoners.’ 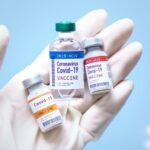 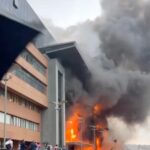