Sadio Mané is on fire right now with eight goals in his last eight Premier League Games and two more against Bayern to help ease Liverpool into the quarter-final draw. His first came after 26 minutes when he produced a bit of magic on the edge of Bayern’s penalty box. He spun past the onrushing Bayern keeper Manuel Neuer and chipped the ball in with his left foot.

On 84 minutes he wrapped things up when Mo Salah clipped a ball in with the outside of his left foot from the right and Mané headed in unchallenged.

On 39 minutes Bayern were back level thanks to an own goal by Joel Matip. Serge Gnabry broke down the right and crossed into the six-yard box. Matip, with Robert Lewandowski behind him ready to pounce, could only direct the ball into his own net.

Virgil van Dijk, back after suspension, calmed Liverpool’s nerves in the 69th minute when he headed home James Milner’s corner from the right.

Man of the match: Sadio Mane 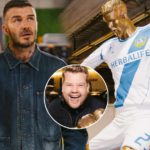 David Beckham – ‘Look At My Ass.’ Corben Stitches Beckham Up Like A Kipper At LA Galaxy Statue Pre-Unveiling!