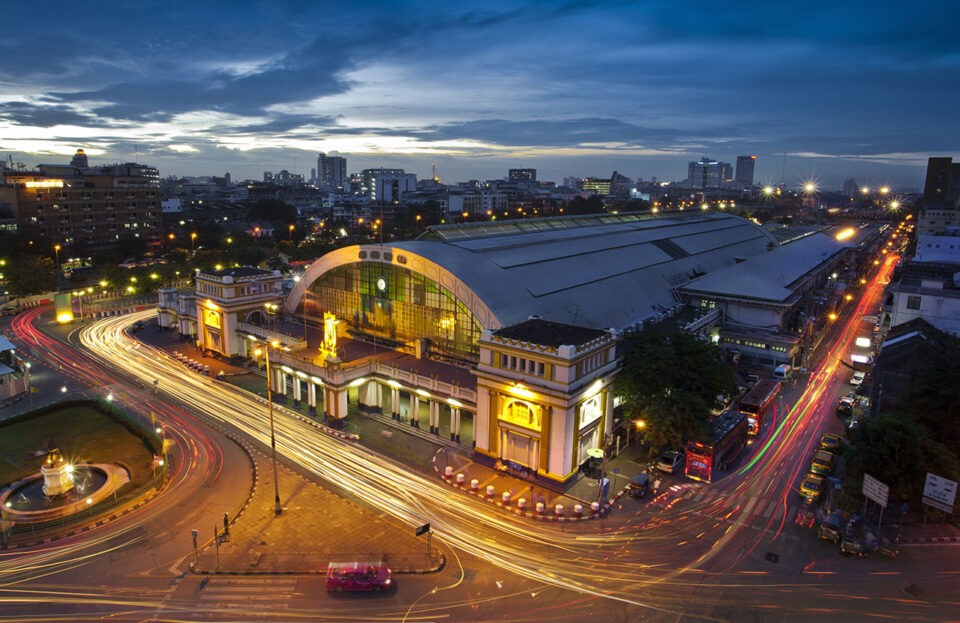 The sound of a station bell faded while a train was about to leave its platform at Bangkok’s Hua Lamphong station. Soon the bell will not be used while the century-old train station will become history when it is closed down next month.

“I don’t want Hua Lamphong to close. The train is the fastest way for me to commute from my home in the northern part of Bangkok to the inner city for work,” said Wathinee Manirat.

It took her about 15 minutes for a one-way ride from Bang Sue station to Hua Lamphong. The fare was only two baht. During the economic downturn amid the Covid-19 pandemic, every baht counts and the train is her preferred option.

Ms Wathinee rode the train to Hua Lamphong for years and so did other passengers from other parts of Thailand.

“I often ride the train to Bangkok as the fare is cheap and it helps me save money,” said Pakkaporn, 40, a farmer.

Hua Lamphong terminal has served commuters and travellers from all walks of life for 105 years. Built in 1910 during the reign of King Rama V, the station was designed in the neoclassical style by an Italian architect Mario Tamagno, who designed several historic buildings in the capital such as Bang Khun Phrom Palace, Phitsanulok Mansion and the Neilson Hays Library.

When the station opened on June 25, 1916 in the reign of King Rama VI, it was regarded as an icon of modernisation. At present, the State Railway of Thailand (SRT) offers 118 daily train rides to and from Hua Lamphong and serves tens of thousands of passengers a day.

Less than a month from now, the service could be a memory. The plan is to close the terminal on Dec 23 before all train services move to the newly built Bang Sue Grand station about 9km north of Hua Lamphong station.

“This is not a sudden decision,” said Transport Minister Saksayam Chidchob.

It has been in the works since the government approved construction of Bang Sue Grand station in 2013 to be the capital’s main train port.

The minister also reasoned that he wanted to make the most use of the 34-billion-baht Bang Sue Grand station when it opens on Dec 24. “I also want to solve congestion caused by traffic which is forced to close when a train passes,” he said.

The ministry also plans to reduce daily train rides to 22 and even reschedule the timetable to avoid rush hours.

He ordered the Bangkok Mass Transit Authority to introduce a new public bus route connecting Bang Sue to Hua Lamphong stations, as a substitute for the missing link on the Red Line electric commuter train service that is planned to connect the two stations but has yet to be built.

Above all, the minister wants to help tackle the SRT’s losses. “I want to see a real improvement in rail services so the SRT can turn its huge losses to profits,” he said.

The SRT founded SRT Assets in April 2020 to manage all of its assets. “We expect to earn income from land owned by the SRT including the land where Krung Thon station is located, Royal City Avenue and the land where Hua Lamphong is located,” said Mr Saksayam.

SRT Asset’s business plan says that within 30 years it hopes to turn the unprofitable state-run SRT into a high-profit business.

“SRT has operated the train service for more than a century and it was in debt for 600 billion baht. Our goal is to make the business profitable within 30 years with earnings of 800 billion baht. I will not be there to see this but I believe we have a good plan to make it happen,” the minister said.

Hua Lamphong station is on a 120-rai site on Rama IV Road and the land stretches about 1.5km in length to Kasat Suk intersection on Rama I Road. The terminal has been renovated several times and this time it will be a major facelift.

“We will develop the Hua Lamphong land to be a mixed-use project featuring commercial space, public space and conservation areas,” Trithip Sivakriskul, a member of the board and acting chief executive officer told the Bangkok Post.

The location is between the old and the new areas of Bangkok. To the west is Yaowarat and Talat Noi and to the east is the central business district such as the Samyan area. The station can be accessed by public buses, via the subway and also the public boat service along Khlong Phadung Krung Kasem.

SRT Asset plans to develop the land and still preserve some historical buildings. The buildings will be renovated into museums or learning centres telling the story of the railway service from the past to the present days, she said.

“We will keep the dome structure of Hua Lamphong, the headquarters of the SRT and the red building. They are iconic landmarks. We will also preserve the remarkable memorials that include the three-headed elephant monument and the sculpture relief depicting the moment when King Rama V hit the first knot on a railway,” she said.

The SRT also will develop the land into public parks, community malls or retail outlets and hotels. “We will develop Hua Lamphong station to be a ‘transportation link gauge’ which is a connection hub for commuters, like famous train stations in other metropolises such as Tokyo train station in Japan,” she said.

Under its development plan, SRT Asset will hire a consultant firm to conduct a feasibility study and outline details of the plan to propose the transport minister and the cabinet to approve.

She insisted the proposal must follow the SRT’s development goal which is to preserve historical structures and develop other parts for public and commercial use.

A source at the SRT told the Bangkok Post that the Hua Lamphong land, which is valued at 2.4 million per square wah, falls under the blue zone in the city’s plan as drawn up by the Bangkok Metropolitan Administration (BMA).

The blue zone is an area that belongs to the government. Approval is needed from the BMA to change the blue to a red zone, meaning a commercial area, before the project can kick off, the source said.

The closure of Hua Lamphong and its development plan sparked concerns among commuters, academics and NGOs. SRT labour union launched an online campaign on Change.org asking people to petition the transport minister demanding him not to close the station. The campaign has almost reached its goal of 5,000 signatures.

Prime Minister Prayut Chan-o-cha said he had told the minister that the development must benefit people. In response, the SRT’s public relations centre director Ekarat Sriarayanpong said the minister ordered the SRT to organise public hearings. He insisted the SRT does not have a plan to demolish or destroy the iconic train station. The SRT will hear what people have to say before closing the station, he said.

Academic teams from various universities and institutes recently joined hands to take a look at what lies ahead for Hua Lamphong. They found the site should be promoted as a creative space with the coexistence of both cultural and historical preservation and commercial space.

“People think Hua Lamphong station belongs to all Thais so if the SRT wants to develop the site, they should involve all parties,” said Assistant Professor Fuangarun Preededilok, head of the feasibility study on “Conservation and Development Project of Bangkok Railway Station (Hua Lamphong)”.

The study was funded by the SRT and Thailand Science Research and Innovation. It was a joint project of research teams from Chulalongkorn University, King Mongkut’s University of Technology Thonburi, Thammasat University, Naresuan University and Arsom Silp Institute of the Arts.

The team interviewed about 1,600 participants in nine sectors including local communities, executives of SRT, the SRT labour union, passengers, those in tourism, travellers, academics, property developers and government agencies.

It found the 120-rai site can be developed into five zones including public parks (accounting about 16% of the land), and a recreation area (18%) where people can host some outdoor events or activities such as music performances.

The third is a creative area (18%) for promoting art exhibitions. The fourth is a commercial zone (30%) where the SRT can use the land for make money. The last zone is the conservation area (18%) and that includes five historical buildings such as the dome terminal.

“Hua Lamphong station can be renovated into a living museum. A train service should still be available to create traffic and that will make the station lively,” she said, adding the rail service can comprise daily short rides to suburban areas or be available for special occasions. The service will serve not only commuters but can also attract travellers to visit the century-old station, she added.

Thip Srisakulchairak, an architect at the Arsomsilp Institute of the Arts said the SRT should follow business models of other old stations overseas that provide some train rides for commuters. “I don’t want us to lose another historical and remarkable building. I believe the old and new should co-exist,” he said.