Home » BUS NO. 8 OPERATOR FINED FOR TRYING TO OVERTAKE ANOTHER BUS IN VIRAL INCIDENT 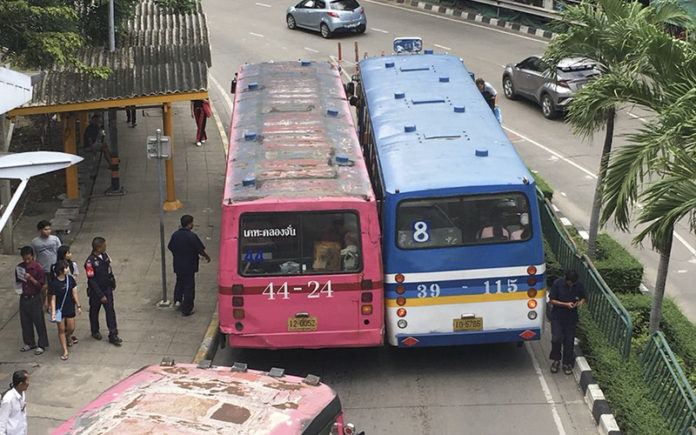 Bangkok Mass Transit Authority (BMA) on Sunday fined two private bus operators after a pic emerged of two of their vehicles smashed together at a stop outside Central Ladprao, a shopping mall in Chatuchak district.

No stranger to the limelight, Bangkok’s infamous No. 8 bus — jokingly dubbed “Fast & Furious 8” and “the worst” bus in city since the ’90s — was acting out again on Saturday and didn’t escape the eyes of social media.

Although it was unclear who took the photo, it was widely shared on Twitter with the caption: “Passengers of No. 8 have no chance to get out of the bus now.”

This time its driver, identified only as an employee of Group 39 Bus Co., Ltd., insisted he didn’t pick a fight, but had simply tried to overtake bus No. 44, which belongs to private operator Raweechok Co Ltd., on Saturday afternoon.

In case you’re wondering, yes, attempting to overtake and pass another vehicle within 30 meters of a pedestrian crossing — as was the case here — is illegal.

Bus No. 44 driver Prasit Boonrouam’s story matched up with the No. 8 driver’s account, telling police he was parked at the bus stop, waiting for passengers to board, when the other bus attempted to squeeze past him in the adjoining lane.

However, the lane was too narrow, and well … you can see the end result.

Now wedged, the Bus No. 8 driver wasn’t confident about his ability to back up his bus, so a third driver — from the just-arriving bus No. 182 — took his place behind the wheel and helped out.

Both companies were fined THB,000 (US$150) for damaging BMA’s imageand not properly managing their employees to comply, reported Amarin TV.

Starting from yesterday, both drivers have been suspended for 15 days. The driver of bus 44 had to pay a THB2,000 (US$60) fine for parking for more than the allotted time, as it reportedly took awhile for the two buses to separate.

If the two drivers break the rules again, BMA warned that their permits may be permanently revoked.

This is obviously not the first time the No. 8 has caused problems in Lat Phrao. Just a few months ago, two No. 8 bus line drivers went viral after getting into a fist fight in the middle of the intersection there. 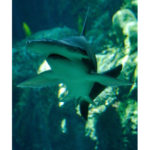 ‘Carnivore’ sharks have a stomach for greens: study