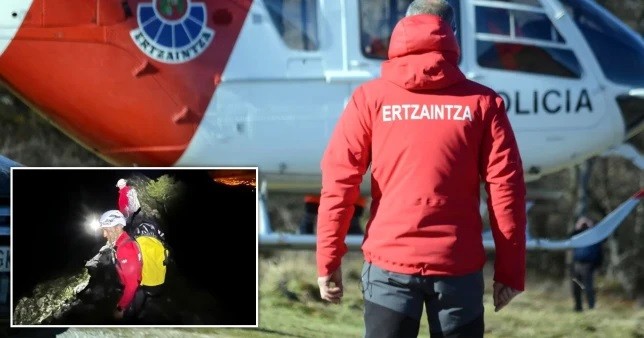 A British man has died after falling from the notorious Devil’s Pass peak while climbing.

The 25-year-old had been mountaineering in the Basque Country in northern Spain.

He was attempting to reach a 4,367ft limestone mountain peak called Anboto when he fell on Thursday afternoon.

The man’s body was found yesterday morning by search and rescue teams.

This morning, police revealed the climber was a British man.

He had been mountaineering with a fellow Brit – but the pair had become separated on the journey.

It was not immediately clear if the pair live in Spain or were on holiday in the area.

Local media said that the men had been staying at a hotel in Eibar, which lies on the banks of the RIver Ego.

They reportedly had become separated on their hike, with the 25-year-old taking on the Devil’s Pass crest alone.

He may have been caught up in stormy conditions near the peak of the mountain, locals have suggested.

Sources said they believed the man could have been trying to descend from the dangerous crest, which can be treacherous in wet weather, when he fell.

A spokesman for the region’s Ertzaintza police force confirmed: ‘Emergency services have located the lifeless body of the mountaineer who we had been searching for since Thursday evening.

‘The alarm was raised around 8.30pm, saying the 25-year-old had gone missing near to the Alluitz mountain summit.

‘A police helicopter found his body in a place called the canal de Infernu Zubi, near to the Alluitz peak, where it appears he could have suffered a fall.’

The climber’s body has now been taken to the city of Bilbao for a post-mortem.

The Foreign, Commonwealth & Development Office has been contacted by Metro.co.uk for comment.

Several people have been killed on the Devil’s Pass – Paso del Diablo in Spanish – and the area around the Anboto summit which the British man was trying to reach.

News coverage at the time led to a debate about whether chains should be installed to help people cross it.

The president of the Basque mountain federation, speaking after a fatal accident there some years ago, said: ‘It’s not a difficult pass to cross but it is dangerous. It’s not for mountaineers who suffer from vertigo.’