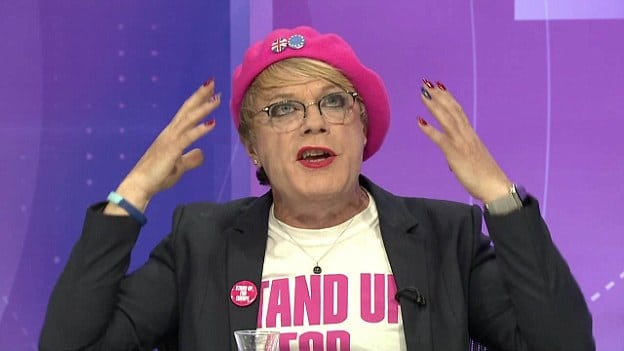 And the problem with militant Left Wing comics, apart from not being very funny, is that they have this uncontrollable urge to impose their silly, leftists beliefs upon a paying audience.

And then bully them into agreeing, at risk of being made a fool of in front of thousands.

A little bit like the Catholic Church of old, or modern day Islam. They simply cannot be happy with their beliefs unless everybody else is drilled down into submission and converted to their way of thinking. Fascism works like this.

Left wing comedians in London seem to have forgotten they are only the act. Just the entertainment. They are who those actually making a grown-up contribution to society, such as nurses, firemen, bus and train drivers, turn to at the end of a hard week and say, ‘come on then, make me laugh. Tell us a joke.’

In days gone by they would be nothing more than a court jester, or juggler, whose political opinions would have seen them pinned to a tree with a lance and then tossed over the wall.

However, thanks to the liberal left wing BBC we find a whole array of so-called funny men, like Russell Brand and Eddie Izzard. (An Albert Jack report for BangkokJack) They seem to think that their platform as court jester naturally provides the self-entitled right to bash, bully and browbeat a paying audience of decent people, who come for a pint and a laugh, into sharing their political opinions.

Opinions, by the way, that Sex Pistol John Lydon has warned will lead to young people failing their education and eventually becoming homeless. ‘Follow Russell Brand’ he said, ‘and you will end up living in a cardboard box.’

Now, in London where everybody appears to have taken leave of their senses these days, this might be acceptable. London audiences by now are so numb they have given up thinking. Not true in the suburbs. Not so in Brexit country.

Out there so called comedians, shaped and shifted by the BBC, are finding their anti-British routines falling flat these days with audience members walking out in numbers for the first time in their careers.

Unsurprisingly the limp left are complaining about this. ‘It was all going so well, this wasn’t supposed to happen. Ok, so I ranted and raved about staying in the EU for two years, and called you all quitters and other nasty names, but that is all over now, please still pay to come and see me.’

Marcus Brigstock, a tiresome left wing liberal unfunnyman, who is hugely popular with the BBC and Channel 4, which says it all, found his new routine, including twenty-minutes of anti-Brexit jokes going down like a transvestite in a biker-bar. He was stunned as audiences outside London started walking out.

“A lot of the people that I think of as my audience will not be back,’ he wimpered, ‘they won’t come again – they’re that angry,’ he told BBC Radio 4.

On Facebook he added, ‘For the first time ever on tour I have people walking out every night – not hoards, but some. That’s unsettling.’

And it serves him right. Because on social media, for the last two-years, he has been labeling Brexit voters as ‘reckless, stupid and bigoted.’ This court jester had failed to realise that insulting the paymaster as ‘reckless and stupid’ leads to being thrown over the wall. Now that is a reckless and stupid thing for an entertainer to contemplate.

He then insisted that Brexit voters ‘don’t care about any cost, consequence or chaos.’ Dwindling audiences is the cost and consequence of this arrogance Marcus – who seems to care, if not understand.

He also described UKIP leader Paul Nuttall as a ‘racist, lying bollock.’ Clever guy, listen to him kids. Actually don’t, you deserve better influences. Nobody should ever pay to listen to him again. Ignore this chump forever.

But Brigstock, predictably, is now blaming his growing unpopularity on Brexit for being ‘divisive and upsetting’ and not himself, for being ‘offensive and ignorant.’ Will these people ever take any responsibility for themselves? Silly question, I’m sorry. Forget I asked.

Brigstock added, ‘it seems that for the most part Brexit is not just the hideous social and political turn we have taken as a country but is also comedic poison.’ Keep at it funny guy, keep on alienating your audiences. There’s two more who just walked out every night.

Stewart Lee is another far left comedian, who also recently spoke about how his shows and material are now far more unpopular in Brexit-voting areas. He wrote in The Guardian last month:

‘I initially played the show for four months to the metropolitan liberal elite of Remain-voting London, who lapped up my Brexit bit greedily, as if it were a newly spiralised courgette. Then I went out into the wilderness of Brexit Britain, where the Remain-voting towns loom out of the darkness.’

A newly spiralised courgette? Is this funny? And how does it feel to learn that left wing London Liberals consider anywhere outside the M.25 as wilderness, beyond the pale.

Surely this is comedy gold – isn’t it? Well, laugh then.

Andrew Lawrence, one of the few pro-Brexit comedians in the country, responded to his colleague’s shock on Facebook. ‘Whoops, Anti-Brexit Leftist comedians dying on their arse, nationwide… #cultureshock’ he wrote.

Below the post, comedy fan Chris Roscoe commented: ‘I saw Marcus Brigstock’s show in Scunthorpe. When he started telling jokes and stopped firing off his Brexit opinions the quality of the show improved.’

Adding: ‘I’m glad the London bubble is being pricked as many of the ‘comics’ based there don’t have a fecking clue what many living in the rest of the country think.’

Aaron Brown, the editor of the British Comedy Guide, agreed. He argued comedians were choosing to insult the majority of the country rather than understand and entertain them.

‘I consume a lot of comedy – mostly TV, also some live – and would say the comedy world’s reaction has been almost exclusively negative,’ he told The Telegraph. Many jokes essentially paraphrase as ‘shooting ourselves in the foot’, and the rest rely on lazily branding 52% of the voters as racist.’

‘One would have hoped comedians would be able to find comic mileage in their evident disengagement from half of the public.

However, there instead seems to be little to no such acceptance and analysis of the referendum result, instead merely anger at lashing out at stupid people making the wrong decision, as they see it.’

‘As far as audience reaction goes, it tends to be fairly warm with television studio audiences as most such recordings take place in the resolutely pro-remain London.

But in the rest of the country – England and Wales, at very least – one can only begin to imagine how alienated and offended some audiences must feel.’

The truth is that, fortunately, the political left has been done no end of harm by the political rantings of court jesters as appearances by Eddie Izzard and Russell Brand on BBC’s Question Time reveal.
–––
Their ill-considered rantings & ramblings, repeated interruptions, sneering, snarling, name calling and finger pointing led ordinary decent people, in front of their TVs all across the land, to the final opinion that ‘whatever this is, I want no part of it, so I will vote the other way.’–

They lost the Brexit vote in this way on a political platform that the biased BBC had no business including them on. And now they suffer the consequences of walk-outs and collapsing audiences.

Why would anybody spend their hard-earned cash on the court jesters, the paid act, telling them why they are so ignorant and stupid and then claim they were only joking?

Nobody is listening to their humorless, thoughtless bullshit anymore, throw them over the wall.

Thailand’s new Constitution: Everything you need to know