Home » British biker, 83, is killed in a horror crash 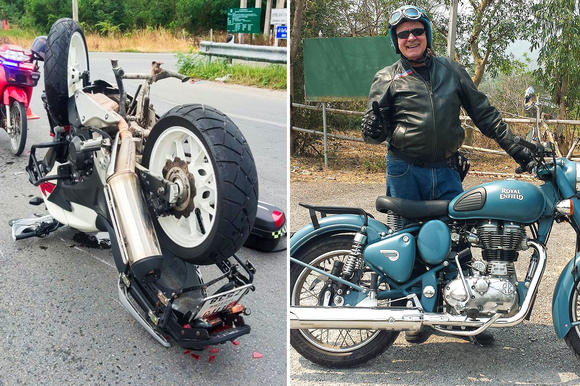 A British pensioner was killed on Sunday in a horrific motorbike crash in Thailand involving a car, according to reports.

Keith William McVeighty, 83, was riding along the motorway when the car suddenly pulled out from a side road in Chiang Mai on Sunday morning.

CCTV footage shows how the female driver accelerated across the road onto the outside lane straight into the path of McVeighty, originally from the Isle of Man.

The shocked rider pulled his brakes but was unable to avoid smashing into the back of the silver Mazda SUV.

The motorbike lover, an experienced rider who had previously competed in the Isle of Man’s TT race, was flung onto the roof of the vehicle before falling onto the road.

His helmet came off in the collision.

Paramedics rushed the ex-pat to the city’s Hang Dong Hospital but he was pronounced dead several hours later. His family have been informed.

Investigating officers are now questioning the female driver of the car, reportedly a Chinese woman from neighbouring China, who was visiting the region.

They are reviewing CCTV of the crash to determine whether she had been driving recklessly and if she caused the collision.

Police Captain Jetsada Pankaew from Hang Dong police station confirmed the fatal incident, and said his department was investigating the cause of the crash.

He also said if the driver was found to be at fault, they would be prosecuted.

We are interviewing the driver and checking CCTV cameras to find out what caused the accident,’ the police captain said following the crash.

‘If they were at fault they will be prosecuted in accordance with the legal process.

‘The motorbike rider died due to the injuries he suffered in the crash.

‘He had a very powerful big bike but he was very confident riding on the road. The bike has been checked as evidence.

‘We have followed the normal procedure and the British Embassy has been informed of the death.’

The UK’s Foreign Office confirmed that a man had died in Thailand and that it was supporting his family, without giving more information.

‘We are supporting the family of a British man who has died in Thailand.’

Body ‘found tied to a tree’ in Amazon Brit journalist 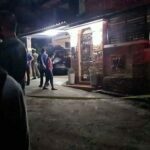 judge found dead in his house