A British tourist caught out in an insurance scam was forced to make a humiliating apology after claiming he was robbed at knifepoint.

Adesanya Olamide Omolaja, 35, told police he was held at knifepoint by three men who demanded he hand over his backpack in Koh Samui, Thailand.

He said the locals made their escape on motorbikes and he was devastated that his prized Apple MacBook had been nabbed.

He then asked for an official police report to make his fake travel insurance claim.

But when officers began investigating, CCTV showed Adesanya had left his room without a rucksack on the day he claimed to have been robbed.

The financial trader was also accompanied by a young woman – contradicting his claim to have been alone taking photographs of a house when he was robbed.

Police Lieutenant Colonel Varong Thapana, Chief of Tourist Police in Koh Samui, arrested Adesanya on June 14 and the holidaymaker admitted he had lost his laptop back in England.

Officers ordered him to make a grovelling apology while warning others not to make unscrupulous travel insurance claims.

Adesanya said: ”As you have seen from the video that was what happened to me the other day. I guess the lesson here is that when you come over to Thailand, just be straight up with the police. Don’t lie.. again, I took bad advice and see where it landed me.”

The Brit claimed that the woman he had been with talked him into making a fake claim in order to get a police report to make a claim in England.

He added: ”Again, I’m sorry to Thai people for my misconduct. And if you come to Thailand try not to get yourself into this kind of problem, as I did. Don’t lie, just be honest with the police, because they will check, and you might get into a lot of trouble.”

Fake travel insurance claims for lost or stolen goods as well as health problems while abroad have soared in recent years – pushing up premiums and wasting police time.

Lieutenant Colonel Varong said such frauds also damaged the image of tourist resorts and that offenders would be blacklisted.

He added: ”These kind of false claims are not only harming other people but also the safety in Thailand safety and the tourism.

”This will not be tolerated and will continue to proceed to co-operate with immigration to cancel this tourist’s stay and his permit to entry the country in the future.” 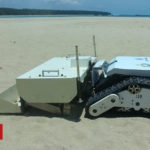