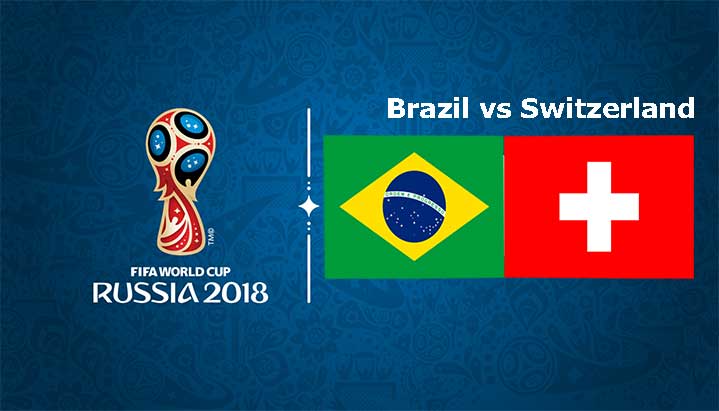 Brazil made a stuttering start to their World Cup campaign as Switzerland dug in for a 1-1 draw in their Group E opener.

The Brazilians looked to be in full control of their opener when Phillipe Coutinho spectacularly fired home from range in the 20th minute.

However, some suspect defending allowed Steven Zuber to nod home from a corner five minutes into the second half – and the goal survived a VAR review for an alleged push on Brazil defender Miranda.

Brazil came on strong in the closing stages as Neymar, Roberto Firmino and Miranda all went close but the resolute Swiss held on.

In their first World Cup game since famously losing 7-1 to Germany in the semi-final in Rio four years ago, Brazil took their time to warm up.

Man of the match: Phillipe Coutinho

Marcelo was the only survivor from that Germany defeat that started – and it was down his left side where Brazil looked dangerous.

They took the lead on 20 minutes when Neymar’s run down that flank left space for Coutinho to work in. He took aim from 25 yards and the ball curled perfectly into the net, via the inside of the post.

Switzerland saw plenty of the ball after the goal but lacked quality in the final third.

The five-time World Cup winners from South America looked comfortable – almost too comfortable at times – and the Swiss made them pay after the break.

Xherdan Shaqiri whipped a sensational corner into the six-yard box which found Zuber in space despite five Brazilian defenders being within yards of him. He headed home, although Brazil were aggrieved as the Swiss scorer had seemingly pushed his marker Miranda in the back.

However, the VAR deemed there was nothing wrong with the goal.

Despite Neymar’s best efforts, Brazil lacked a spark in the final third until the closing stages where they should have bagged a winner.

Firmino’s close-range header was clawed away by Yann Sommer before Miranda fired inches wide after a long ball had caused problems in the Swiss defence.

Man of the match: Phillipe Coutinho

Hard to pick a standout individual, but the Barcelona man provided a world-class moment that should have sent Brazil on their way to victory. At times, he linked encouragingly with Neymar, which bodes well for the remainder of the tournament.

Brazil have Costa Rica next up on Friday while Switzerland take on Serbia, who opened their campaign with a 1-0 win over Costa Rica and top Group E.