Spurs Looking To Bounce Back

Spurs, fresh from two away day defeats at Burnley and Chelsea, haven’t lost three Premier League games on the bounce since November 2012 and to keep their season alive they need to win this one. A week ago they were still an outside shout for the title. But now both Arsenal and Manchester United are closing in on their third place.

Arsenal are coming into this one on the back of five league wins out of six and now sit in fourth place. Four of those wins were at home with the one away 2-1 at Huddersfield. On the road, they’re not so hot and sit in eighth place in the away form table. Before beating Huddersfield they lost at Manchester City, West Ham, and Liverpool. Plus they have not kept a clean sheet on the road all season.

Harry Kane has escaped a FA retrospective penalty for his head to head clash with Chelsea’s Cesar Azpilicueta and will be determined to push Spurs to victory and enhance his chances of the Premier League’s Golden Boot this season. He’s slipped back after his recent injury but he’s still in touch with the leaders.

Spurs could still be without Dele Alli, hamstring, and Eric Dier, illness, whilst Jan Vertonghen is struggling with his hip injury and has a 75% chance of playing.

In addition to their long term injury problems Héctor Bellerín, Rob Holding, and Danny Welbeck, Arsenal will give late fitness tests to Laurent Koscielny, knock,  and Stephan Lichtsteiner, back.

Spurs to bounce back and make the most of Arsenal’s poor form on the road.  Mauricio Pochettino, recently crowned London manager of the year so he now has a trophy, has never lost at home to the Gunners. 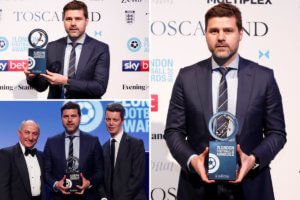 Pattaya One. Mauricio Pochettino London Manager of the Year. With the great Ossie Ardiles in bottom left picture.

Bournemouth have conceded 53 goals, with only Cardiff and Fulham shipping more, and they have an inconsistency about their game which suggests Manchester City could get back in the goals. City haven’t scored in open play for more than 210 minutes!

One of the finds of this Premier League season, David Brooks, should be back for but Callum Wilson, knee, is not expected back until next week. Still suffering from long term injuries are Simon Francis and Lewis Cook with their anterior cruciate ligaments. Jefferson Lerma is suspended for another week whilst Dominic Solanke is battling with a thigh injury and has a 75% chance of playing.

At the Liberty Stadium, this season Liverpool scored four and City have the firepower to match that but there is the Fernandinho question to consider. Without him, they lost to Crystal Palace and Leicester. Against West Ham, a soft penalty lead to a 1-0 win. Also David Brooks to score against the team that let him go.

Huddersfield are on a roll and unbeaten in the last three days whilst Brighton sit at the wrong end of the form table with four losses and one draw in their last five games. From looking safe a few weeks ago they are being sucked into the relegation dog fight.

Against Leicester, they were unlucky to be the first team to face them after Claude Puel’s sacking. A new manager tends to come with a good luck factor and that applied on Tuesday with Brendan Rodgers sat smiling in the Directors Box. They also came up against an inspired Tom Heaton when they lost 3-1 at home to Burnley.

But Brighton’s form, apart from a reasonable run with three wins on the bounce during October, has been appalling.

Glenn Murray, in search of his 100th career league goal, fluffed his lines on more than one occasion against Leicester on Tuesday. Boss Chris Houghton will need him to take those kind of chances or risk sliding down the table even more. Leon Balogun and Pascal Groß look like they are definitely out of this one.

Tommy Smith is still suspended whilst injuries and lack of fitness are expected to rule out Isaac Mbenza, Adama Diakhaby, and Danny Williams. Demeaco Duhaney and Abdelhamid Sabiri both have a 75% chance of playing. Against Wolves, boss Jan Siewert made eight changes and stumbled on a winning formula. He might be keen to stick with it and let the prolific Steve Mounie, two goals from 22 appearances this season, lead the line.

The referee for this one is Mike Dean and he’s issued 99 red cards. Perhaps he should have celebrated his 100th last week at Burnley with Spurs boss Mauricio Pochettino the recipient for his on-pitch end of match rant. But Dean’s been stuck on 99 for a few weeks now and it might be time to get the red out of his pocket again.

When these two teams met at the John Smith Stadium Mounie saw red in the 32nd minute for a foul on Yves Bissouma. Michael Oliver delivered that one. Huddersfield lost 2-1. Potential candidates for a Dean red are Brighton’s Lewis Dunk and Anthony Knockaert.

The pressure is off for Huddersfield and they can play with smiles on their faces. They are going down and they know it so no pressure. The inform Mounie could make amends for his red card back in December. For Brighton, they are under real pressure.

Two teams on 30 points clawing their way away from relegation. Burnley are back to their old ways, apart from the midweek loss at Newcastle, and have recovered from their Europa League exploits. Meanwhile, Palace have done pretty well on the road this season and sit 10th in the away league stats.

Aaron Lennon, knee, and Steven Defour, calf, are both out with unknown return dates. Jonathan Walters is out with an Achilles problem and not expected back until March 30th.

For Palace Julian Speroni, knock, and Aaron Wan-Bissaka, hamstring, are out with unknown return date. Pape Souaré has a shoulder injury but could be back by March 16th.

Two teams, heading in the right direction, but both suffered midweek defeats. Burnley have an impressive newcomer, 19 year old Dwight McNeil, who could help turn this game. 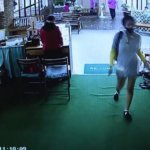 HOW TO POSSESS MARIJUANA LEGALLY IN THAILAND – RIGHT NOW