Taxi Report TH said that a taxi driving pervert had turned himself in to police after sharing a selfie of him driving his cab with a female passenger in the back with her legs wide open.

The driver said it was not his intention to publicize the picture – it was just for his taxi mates on the “dark taxi web” to have a good ogle at.

The police did absolutely nothing and handed him over to the Department of Land Transport.

They fined him 1,000 baht and made him sit in front of a TV screen and watch three hours of “awareness training”.

Earlier in the week, Thai Rath produced a video that said the man has been taking pictures of people in the back of his cab for years.

He once posted a picture or video clip of a foreign couple snogging.

The driver always denies he is doing anything wrong. 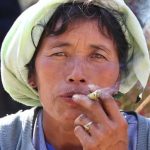