It’s rare enough seeing horses in Thailand, let alone three of them all galloping down the road.

But that was the strange sight that greeted drivers in Chiang Mai on Monday morning.

Two of them were dragging long ropes behind them. So it seems like they’d broken free from wherever they’d been tethered up. Video of the incident went viral after it was posted online.

Tanapath, a mechanic, said: ”I was very surprised to see the horses and wanted to know who they belong to.

‘’It’s quite unusual to see horses in Thailand. It’s even more strange to see three of them running down the road. It was very dangerous and could have caused an accident.

‘’I thought I was imagining it at first. I had to look twice, then rode my motorbike next to them to record them. They were running quite fast.

‘’I think they escaped from a farm. Somebody will be looking for three horses that have gone missing.” 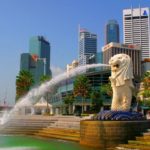 Temple has a block of toilets built around a tree