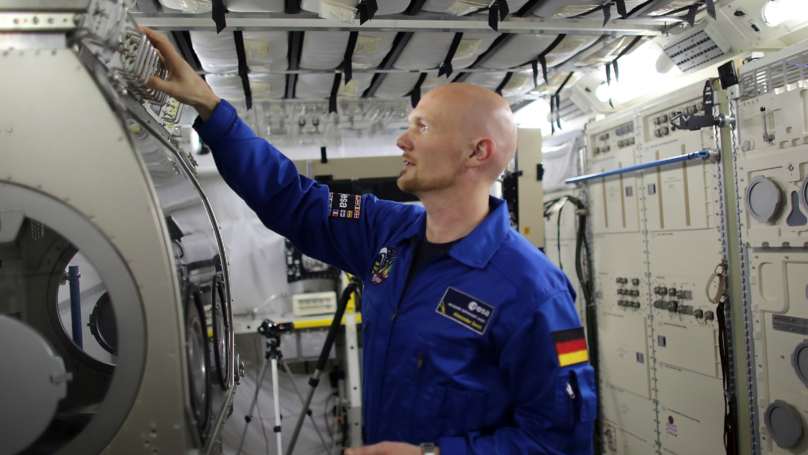 Remember on The Simpsons when Homer used Bart’s earring to plug up a hole in a submarine? Well one astronaut has done one better and stopped a leak in the International Space Station with his finger.

A leak was spotted on the ISS by NASA after a ‘meteorite crash’ smashed into it and ripped a hole in the station.

During a live feed from the ISS, NASA’s ground control were heard to comment: “Right now Alex has got his finger on that hole and I don’t think that’s the best remedy for it.”

After the Russian crew taped over the hole, a sealant on a cloth was stuck over the area.

Now flight controllers are monitoring the cabin pressure while coming up with a better and long-term solution for the leak.

Here’s the scary part – even though the leak is on 2mm, if NASA hadn’t spotted it the crew would have run out of air in just 18 days.

Mission Control outside Moscow told the astronauts to let the sealant dry overnight and that more leak checks would be conducted Friday.

The crew’s makeshift repairs to the leak seemingly have stabilised the situation – for now at least – it’s been reported by officials.

Even with the scary thought the space crew could have run out of oxygen, NASA and Russian space officials have stressed all six astronauts on the ISS were and are in no danger.

In fact, NASA have released a statement saying it is far to early in the day to speculate on whether they might have to return to Earth early if the leak cannot be stopped.

The hole is actually located on a part of the space craft which doesn’t actually return to Earth, so they couldn’t bring it down to fix and send back up.

For the six astronauts on the 250-mile-high ISS, currently home to three Americans, two Russians and one German, things like orbital debris is always constant threat, even the tiny 2mm pieces.

Why Does Food Taste So Much Better When You’re Drunk?