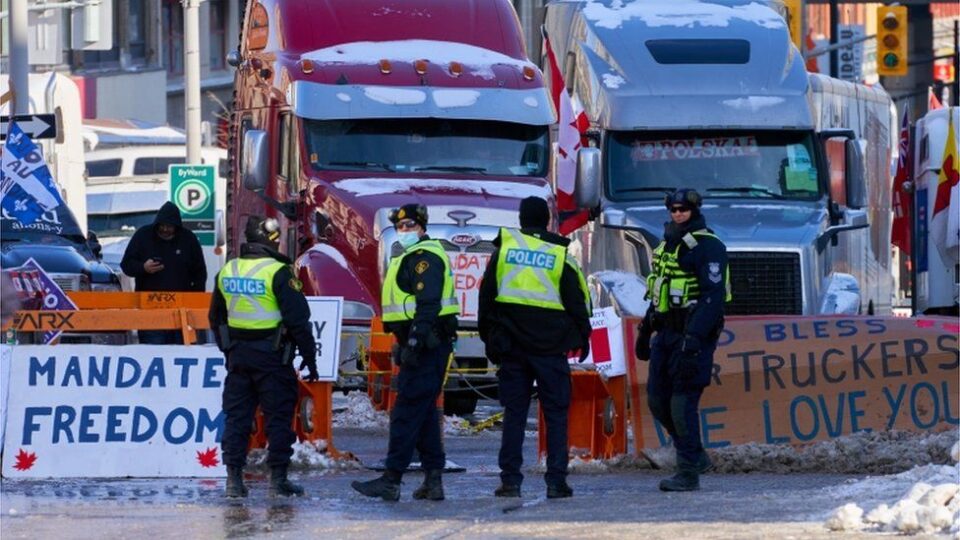 Ottawa is under a state of emergency as police try to contain the rally.

Up to 25% of vehicles in the so-called Freedom Convoy have children in them who could be at risk during operations, authorities said on Tuesday.

The rally has grown to include thousands of demonstrators.

It began on 9 January in western Canada, as truckers protested against a rule that requires them to be vaccinated against Covid-19 to cross the US-Canada border. The demonstrations have morphed to include anger at a raft of Covid-19 restrictions and at Prime Minister Justin Trudeau’s government generally.

Though the convoy has been mostly peaceful, police have expressed concern about extremist rhetoric coming from far-right groups among the protesters. As well as reported racial and homophobic abuse, some danced on the Tomb of the Unknown Soldier at the National War Memorial.

Nearly 80 criminal investigations have been opened in relation to the protests, with two dozen arrests made.

Officers who issued tickets and warned people away have been met by protesters determined to stay, and even a fake bomb threat which authorities said was intended to “deceive and distract” police.

One officer was reportedly attacked while attempting to seize fuel from a protest truck.

Speaking to press on Tuesday, deputy police chief Steve Bell said: “Our message to the demonstrators remains the same: Don’t come. If you do, there will be consequences.”

Mr Bell also disclosed on Tuesday that police had found about 100 trucks with children in them and contacted Children’s Aid Society overs concerns with noise, fumes and hygiene.

Some 740 miles (1,190km) away from Ottawa, Canada’s busiest border crossing was partially reopened on Tuesday after protesting truckers ground traffic to a standstill.

Truckers rallying in solidarity with those in Ottawa had blocked the Ambassador Bridge on Monday night, forcing vehicles to take long detours.

The bridge over the Detroit River is a vital trade link between Canada and the US, with more than 40,000 people and $323m (£238m) worth of goods cross it daily.

Sixty business groups from the US and Canada have called for an end to the blockade.

According to police in Michigan and Windsor, protesters had forced authorities to close the span shortly before 21:00 local time on Monday – just hours after Canadian Prime Minister Justin Trudeau had accused the demonstrators of attempting to “blockade our economy”.

Hundreds of vehicles were backed up for miles as travellers were warned by Canadian police to reroute.

While now open for travel from Canada to the US, across the other side, the Michigan Department of Transportation said the bridge remained closed and advised drivers to divert to nearby Port Huron to head into Canada.

Business groups in the US and Canada called the blockade “an attack on the well-being of our citizens and the businesses that employ them”, and demanded a full reopening.

As traffic continued to clog the area, demonstrators in Ottawa faced anger from local residents even as many insisted that they were protesting peacefully.

“There’s been nothing but love, unity and peace out here,” said John Van Vleet, a trucker from Ontario. “It’s important for me to come down here to fight for my freedoms.”

However, some Ottawans have said the atmosphere has been tense, especially on weekends when thousands of protesters have descended upon the city’s downtown core, spilling into nearby streets.

“We’re all fed up,” said Marika Morris, a resident. “They don’t have a right to take us hostage.”

Ottawa has been under a state of emergency since Sunday.

Even before that, the city centre had been paralysed for a week as hundreds of lorries parked in the city centre and gatherings of protesters had forced businesses to close.

Residents’ nerves were also being frayed by constantly blaring air horns. On Monday, an Ottawa judge ruled that the truckers must stop honking their horns for 10 days.

Demonstrations have also spread to other Canadian cities, including Toronto and Vancouver. Internationally, there have been rallies of support in New Zealand’s capital Wellington and Canberra in Australia.

The Canadian province of Alberta announced on Tuesday that some of its Covid restrictions – including its controversial vaccine passport – would be lifted from midnight.

Masking requirements for school students will also end from Monday, and children under 12 will be exempt from all mask mandates.

Alberta Premier Jason Kenney denied the move was a response to the trucker protests.

“We’ll never be able to do a full accounting of the extent of the pain and hardship that restrictions have caused,” Mr Kenney said.

“We cannot remain at a heightened state of emergency forever. We have to begin to heal.”

But he also argued that “for the rest of our lives we’re probably going to need to take an annual Covid shot, much like the annual flu shot”.

Saskatchewan, in the country’s west, also said it was ready to lift all Covid restrictions.

“We want things to be as normal as they possibly can,” Saskatchewan Premier Scott Moe said.

For city blocks, in the centre of the national capital, massive trucks are parked, many decorated with signs calling for an end to vaccine mandates – or simply “Freedom”.

Up to 500 such trucks are estimated to be in Ottawa’s downtown right now and many have been there for going on 12 days.

The fences in front of the parliament building are covered in hundreds of handwritten protest signs expressing support for their cause.

The protesters say that theirs is a cause all Canadians should applaud – but after nearly a fortnight of blaring horns and streets shut by blockaders and police, many residents of Ottawa see it differently.

“They’ve done their protest and should have been sent home a long time ago,” David, a local business-owner, said.

Holding a sign opposing the protests, he said he has got some supportive honks and thumbs up from passers-by. But he’s also been yelled at by protesters, or bumped into and pushed, and they’ve tried to take his sign. 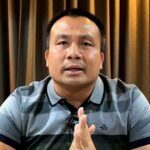 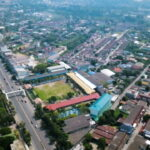