Surachet said Lawrence Ricardo Byrd II, 35, has been arrested at his rented room on Soi Sukhumvit 38 in Bangkok’s Klong Toey district after the bureau was asked to track and arrest the fugitive by the US embassy.

Surachet said Byrd was a drug suspect in Georgia, allegedly involved in trafficking marijuana and other drugs in the state.

Most recently, he travelled into Thailand on April 16, this year, and was allowed to stay in the kingdom until May 15 but he overstayed the visa by 141 days. 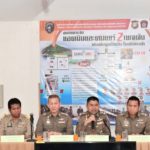