Home » An Amazing Day in Bangkok – And photos from the day. Exclusive interviews to come.

An Amazing Day: September the 7th October 2018 – Staff from the PattayaOne office was invited to one of the most exclusive events for this years. We all met up at 2pm and left in a taxi heading toward Bangkok – yes in the busy period, but we made it to our final destination.

Athenee Tower was host to The American Academy of Anti–Aging Medicine. Also along side this was another event which was inducting the best of the best into The Hall of Fame in Martial Arts.

It was an amazing chance to see and meet legends on and behind the scenes of some of the most famous films ever made. Some of the amazing legends we met here were:

Mark teaches Martial Arts and Dancing, works as an Actor, Stunt man and Entertainer.For fun he loves to Dance Argentine Tango, Bike, Swim, Scuba Dive, Cave Dive, Skydive, Hike, Shoot, Sing, Anything that is fun. Mark holds the world record for” Most garters caught at weddings” with 16 garters and is waiting for the Guinness Book of World Records certify him. As a entertainer and professional singer Mark has performed all over the world including shows on Cruise Ships, in Ballrooms and theaters in the UK, China, Thailand, Mexico and the USA. Martial Arts has been A big part of his life, starting at 9 years old and working his way up to Having been able to trained and learn from the best in the world!For over 40 years Sifu Mark Gerry has train in and teaches Martial Arts at seminars all over the world. He is the highest ranking Ryukyu Kenpo black belt on the west coast of the USA with the formal title of Grandmaster and the rank of 9th Degree Black Belt .He was promoted Sept 1, 2006, inside Shaolin Temple in China to 8th and was promoted to 9th Degree Black Belt on Nov 17, 2012.

Sifu Gerry also holds the ranks of 8th degree Professor in Kajukenbo. He was promoted by Kajukenbo Founder Great Grand Master Sijo Adriano Emperado(RIP) in 2004 to 7th degree and by Great Grand Master Al Novak on July 4 2011 to Professor 8th Degree. Sifu has a 7th degree Black Belt in Tae Kwon Do and has won many Gold Metals, First Place and Grand Champion Trophies and countless Awards for his work in the Martial Arts. Sifu Gerry is a 8 Time Martial Arts Halls Of Famer. There is much more to this man, but we could be here all day lol. 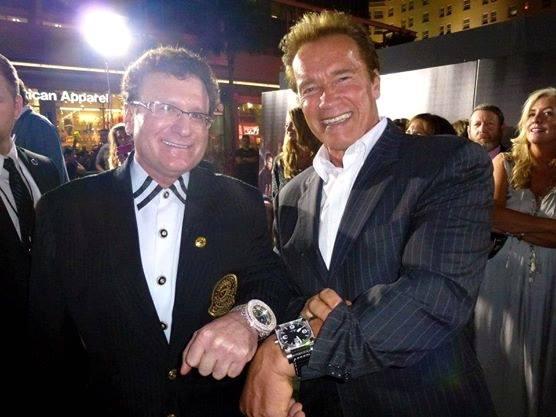 Dr. Goldman is a 6th degree Black Belt in Shotokan Karate and 7th Degree Black Belt in Tang Soo Do, Chinese weapons expert, and world champion athlete with over 20 world strength records and has been listed in the Guinness Book of World Records. Some of his past performance records include 13,500 consecutive straight leg situps and 321 consecutive handstand pushups. Dr. Goldman was an All-College athlete in four sports, a three time winner of the John F. Kennedy (JFK) Physical Fitness Award, was voted Athlete of the Year, was the recipient of the Champions Award and was inducted into the World Hall of Fame of Physical Fitness, as well as induction into numerous Martial Arts Hall of Fames in North America, Europe, South America and Asia (www.DrBobGoldman.com). He founded the International Sports Hall of Fame (www.SportsHOF.org), recognizing the world’s greatest sports legends, with ceremonies held annually at the Arnold Schwarzenegger Sports Festival-the largest sports festival in the world, with over 200,000 participants, 70+ sports represented and over 20,000 competing athletes, making it double the size of the Olympic Games. Dr. Goldman was the 2018 recipient of the ‘LifeTime Achievement Award’ presented by Gov Schwarzenegger.

Dr. Goldman, holds two Physician & Surgeon Medical Degrees and two Medical Doctorates and has served as a Senior Fellow at the Lincoln Filene Center, Tufts University and as an Affiliate at the Philosophy of Education Research Center, Graduate School of Education, Harvard University. He also holds Visiting Professorship at numerous medical universities around the world. He co-founded and served as Chairman of the Board of Life Science Holdings and Organ Inc, biomedical research & development companies which had over 150 medical patents under development in the areas of brain resuscitation, trauma and emergency medicine, organ transplant and blood preservation technologies. These led to the formation of Organ Recovery Systems Inc. and then LifeLine Scientific Inc, a Public Company, which became a world leader in organ preservation and transport. He has overseen cooperative research agreement development programs in conjunction with the American National Red Cross, NASA, the Department of Defense, and the FDA’s Center for Devices & Radiological Health.

As a child and teenager, David Winters acted in many television shows and Broadway productions, including the initial line-up of the stage production of the musical “West Side Story”, playing the role of Baby John.

In 1961, he appeared as A-Rab in the movie version of West Side Story (1961), recreating the “Cool” dance sequence, which was choreographed for him. With Carole D’Andrea, Jay Norman, Tommy Abbott, William Bramley and Tony Mordente, they were the only members of the original Broadway Musical to be cast in the film.

West Side Story (1961) was the highest grossing Motion Picture that year and went on to win 10 Academy Awards, including Best Picture. The feature established David as a young star. He began to release music and had steady work acting.

In 1967, he received what he has called his biggest honor, his Emmy nomination for the choreography of the TV Movie Movin’ with Nancy (1967). This was the first-ever Emmy nomination to a choreographer in the category “Special Classification of Individual Achievements”. His nomination led to the creation of the Emmy’s “Outstanding Achievement in Choreography” award, for which he was nominated in 1970.

It was also in 1967 that David began to direct. His first assignments were for two episodes of the hit show The Monkees (1966). Shortly after he started producing, directing, and doing the choreography for star-studded TV Specials. These include The Ann-Margret Show (1968), Ann-Margret: From Hollywood with Love (1969) (for which he received his second Emmy nomination for dance choreography), Raquel! (1970), Once Upon a Wheel (1971), The Special London Bridge Special (1972), Dr. Jekyll and Mr. Hyde(1973) (nominated for three Emmys), and Timex All-Star Swing Festival (1972) (which won the Peabody Award and a Christopher Award for David as its producer).

David began to produce and directing feature films in 1975. His first effort was the concert film Alice Cooper: Welcome to My Nightmare (1975). This got rave reviews and is now considered to be one of the most creative rock shows ever made.

Shortly after he was hired to choreograph A Star Is Born (1976), starring Barbra Streisand. It went on to win the Academy Award for best song as well as three other nominations.

In 1986, he made the first film about skateboarding Thrashin’ (1986), starring Academy Award Winner Josh Brolin, Sherilyn Fenn, and Chuck McCann. The movie is notable for using in it’s soundtrack music by the Red Hot Chili Peppers (who play a set in the film), Fine Young Cannibals, and The Bangles before their rise to fame. Still today the film has a big cult following.

The year after, he opened his own production company “Action International Pictures” later renamed “West Side Studios” which independently produced and distributed over a 100 motion pictures until the mid 1990’s.

In the 2000’s, he directed Welcome 2 Ibiza (2003) which won the Bangkok Film Festival Audience Award. He also produced the historical epic The King Maker (2005) which won numerous prizes, and had a big theatrical release in Asia. It was distributed for Home Video by Sony in the USA, and by Universal in other countries. It was sold in thirty-six countries, making it the most successful Thai Film ever made.

Most recently, in 2015, David released his latest hit film, Dancin’: It’s On! (2015) where he reconnected with his original passion for dancing. The film stars winners and runner-ups of the successful TV shows So You Think You Can Dance (2005) and Dancing with the Stars (2005). The film won the Wide Screen Film Festival for best director, best editor, and best score. It had a three months theatrical run and, in DVD and Blu-ray, was shipped in platinum quantities twice to major outlets throughout the USA.

He was voted into the Black Belt Hall of Fame in 1970 as “Fighter of the Year”.
He was the Undefeated World Professional Light/Heavy-weight Karate Champion from 1968 to 1974, when he retired from competition.
Began competing in Martial Arts competitions in 1963 and quickly won the 1963 South West Championships, the 1964 National Brown Belt Championships, and the International, National, and World Championships.

Master Kwok was born in Hong Kong the son of a Church Minister, his interest in the martial arts started at an early age from watching performers at a local bazaar and over the coming years he studied

several different styles, always with a deep interest in the technical side, analysing each for their practicality.

It was not until he came to England that he was introduced to Wing Chun. He studied with five Chinese Masters over the years, but as he became more proficient Samuel Kwok noticed variations in the techniques, so it was that Master Kwok decided to return to Hong Kong and go to the ultimate source of Wing Chun, to the Great Grandmaster’s son Yip Chun.

For the next few years Master Kwok had private tuition from Yip Chun, learning the pure and undiluted style. After gaining Master level in Wing Chun and opening a school in Hong Kong he left his Master, Yip Chun, but not before he promised to teach only the pure style of Wing Chun, a promise which Yip Chun made to his father Yip Man before his death, a vow which Yip Chun has strictly observed since that sad day.

Master Kwok became an important figure in the Hong Kong Kung Fu society, with his students, competing and demonstrating at major tournaments representing the Yip Man Martial Arts Association, and it was in Hong Kong that he met Bruce Li, the actor, becoming fast friends and training together regularly.

Since his return to Britain, Master Kwok has continued to teach Wing Chun, at first only privately, then after many requests he organised open schools, which have flourished, and now with new clubs opening all the time covering most of England, and plans to spread more throughout the world, the Samuel Kwok Martial Arts Association can only help to maintain the name of Wing Chun and the pure form of the art in the years to come and protect it from the changes that occur through instructors with an incomplete knowledge of the system, who use the name of Wing Chun to mislead students and to promote themselves to the detriment of the style, and with no regard for those who had preceded them, as you should always think of the source of the water which you are drinking.

Films you have to watch is IP man 3 and Vortex Affects. Simon Kook is being touted as the next big action star from Thailand.

Here are some photos from the day, And keep with us for more photos and exclusive interviews that they made only with PattayaOne. 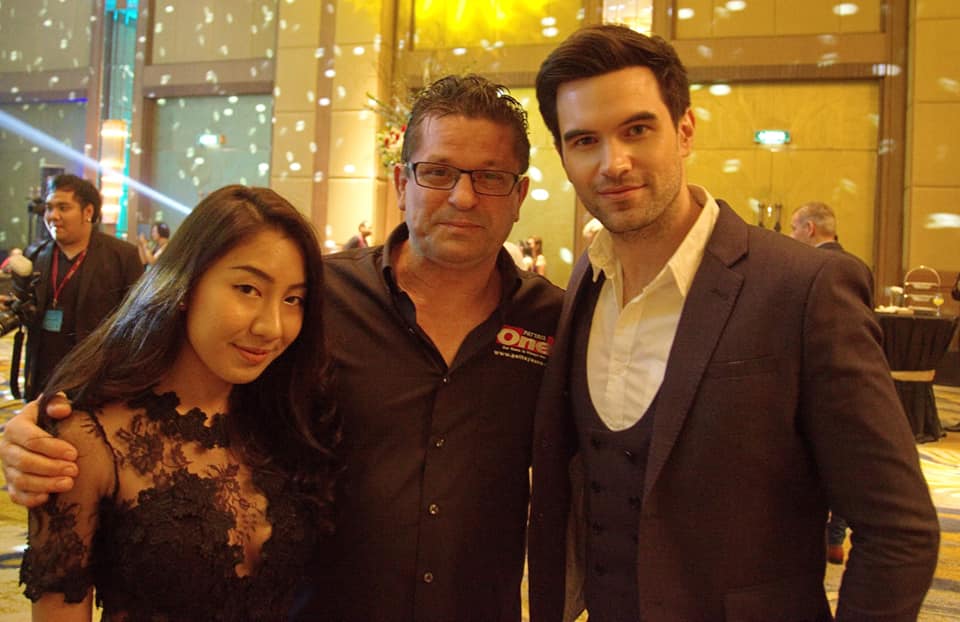 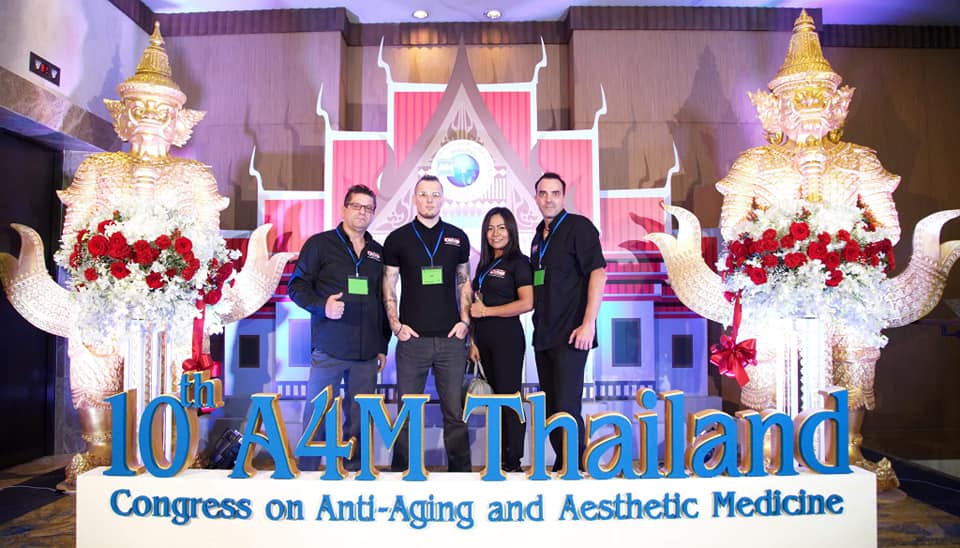 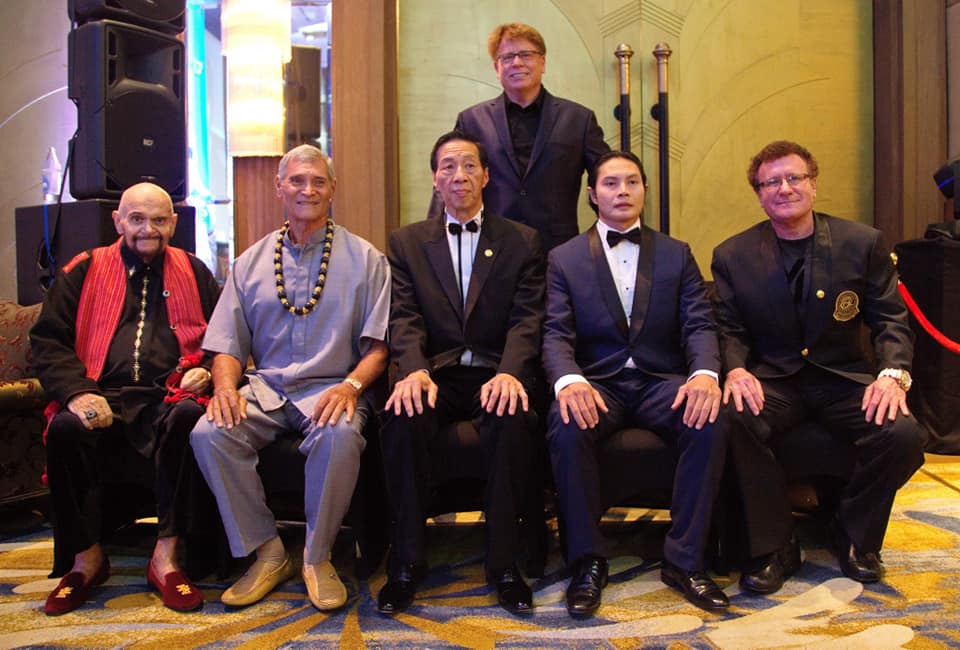 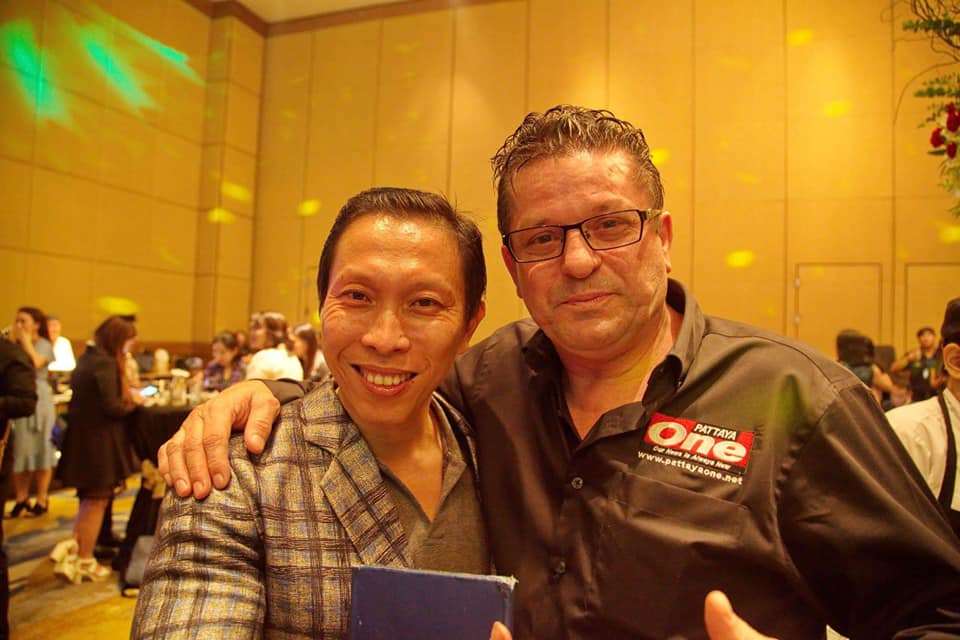 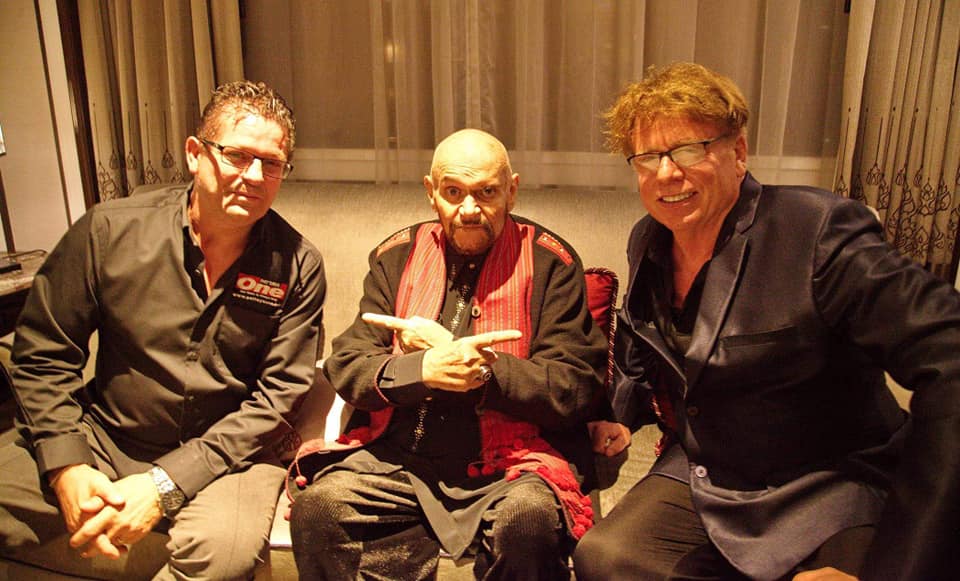 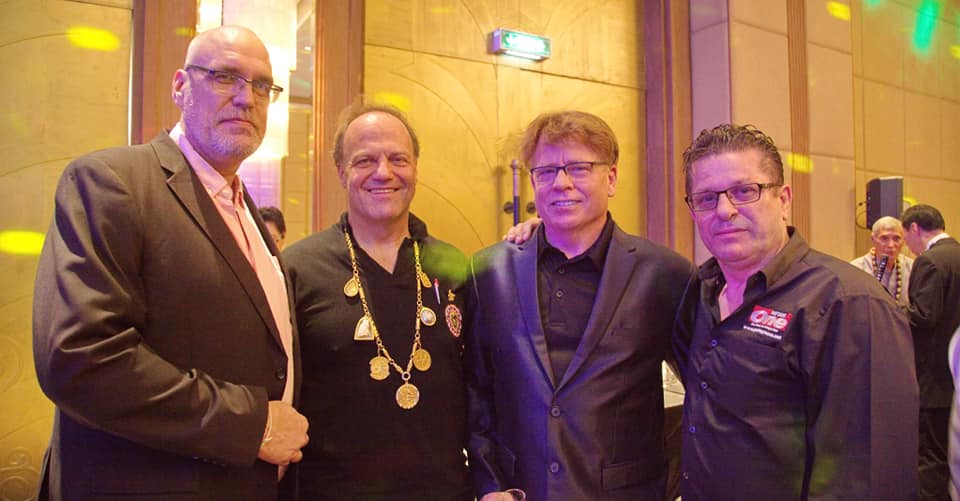 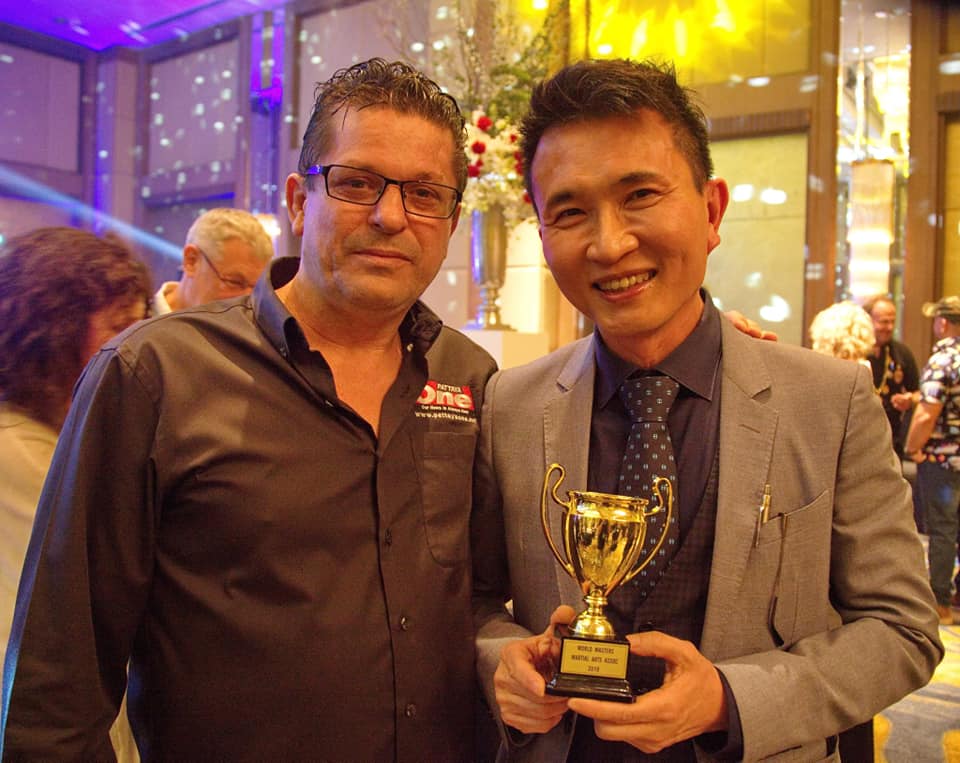 This was a truly magical and an amazing day. our thanks go to Doctor Robert Goldman and Mark Gerry for inviting us. We will have more on this and interviews from the day, so stay tuned.