Its head was down, while its tail was up to the air, after being tied up tightly with a rope attached to a big reel on that trawler. Once in a while, the three-metre-long whale shark jerked, prompting its tail to sway, suggesting that it was still alive.

“See! It’s still alive! It still breathed too,” shouted a woman on a diving boat motoring next to the trawler.

It was last Friday (May 18) when a group of divers encountered a trawler near Racha Yai island off the Phuket coast. There, they saw the whale shark dangled as it was tied up and dragged into the air with its tail tied tightly.

According to one of the divers who decided to post the story on Facebook, and which was later circulated widely, the diving-boat captain noticed that the trawler leaned to one side. As he moved the diving boat closer, the scene of the giant whale shark tied to the reel could be seen clearly by all divers on the boat. They decided to chase the trawler in an attempt to pressure it to release the whale shark. It took a while before the crew of the trawler untied the whale shark from the reel. It got stuck on one side of the trawler before being pushed out to the water.

The marine experts and veterinarians from the National Parks, Wildlife, and Plant Conservation Department, which were assigned to follow up the case, reported to the department that intestines appeared to spurt from the shark’s belly, leading them to conclude that its organs would be severely damaged following its harsh capture and release. Nobody has seen it since, despite the joint effort to locate it, nor has anyone managed to confirm whether the creature is dead – or alive.

The latest incident bodes poorly for the species as a whole, according to marine experts and ecologists, including Petch Manopawitr, a deputy director and Thailand program coordinator of the International Union for Conservation of Nature (IUCN) Southeast Asia, and Assistant Professor Thon Thamrongnawasawat, a vice dean of Kasetsart University’s Fisheries Department. The tragic event reflected the threats to the whale shark’s population at large as the world’s oceans become increasingly hostile waters for vulnerable species.

Whale sharks, here and in international water, have shared a similar fate as they faced threats that are pushing the entire family of sharks to the verge of extinction, with a sharp decline in population observed while their reproduction rate is too low to replenish the stock. 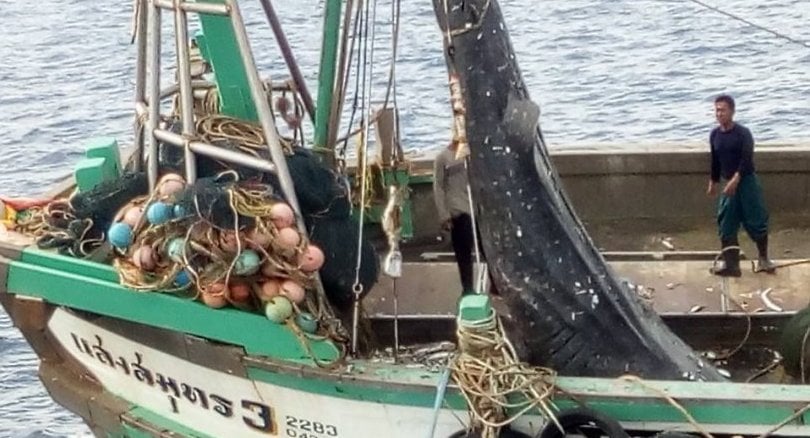 The IUCN two years ago decided to move the species from vulnerable to endangered species on its Red List, implying it faces a very high risk of extinction in the wild. They are officially a big step closer to extinction.

“The creatures are filter feeders, thus playing an important role in an ecosystem by helping control the circulation of nutrients in the food chain. Because of their special size and rarity, these animals have become a new tourist attraction, which help contribute to local economies, and that’s the reasons why the creatures are important both ecologically and economically.”

According to the IUCN’s assessment, whale sharks are the world’s largest living fish, and a cosmopolitan tropical and warm temperate species. Their genetic results indicate that two major subpopulations exist, in the Atlantic Ocean and Indo-Pacific, respectively. The IUCN estimates that 75 per cent of the global population is inferred to occur in the Indo-Pacific, while 25 per cent are in the Atlantic. The decline of the population in the Pacific is around 40 to 92 per cent, inferring an overall decline of 63 per cent over the last 75 years, or three generations of sharks. That is part of the justification for the IUCN has flagging the species as endangered, given that it is the bulk of its global population. 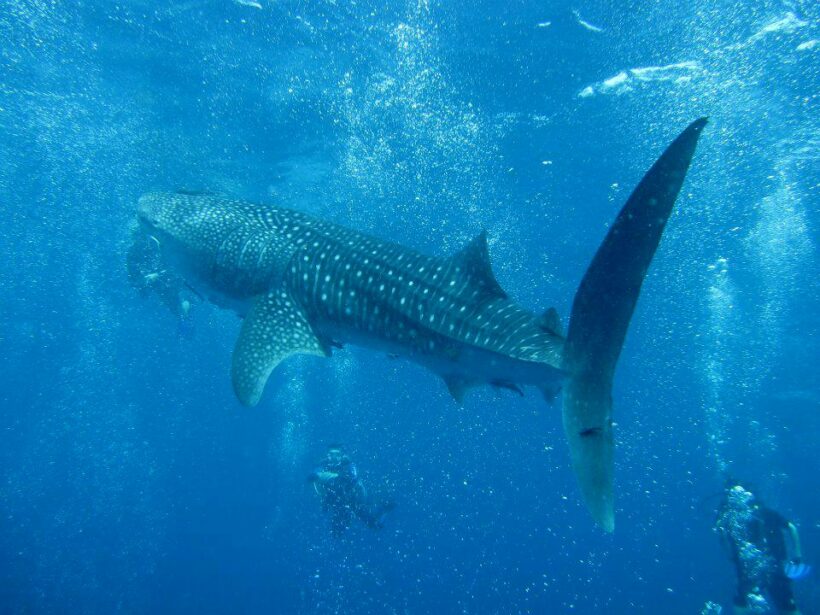 As of February 2016, there were 7,011 individual sharks placed on the database of whale shark sightings, identified from images of their spot patterns submitted between 1964 and 2016. For Petch, what is more of a worry is the fact that the species is slow-growing, late-maturing, and has low-fecundity, prompting it to replenish its declining stock slowly.

Around 100 whale sharks have been recorded roaming through Thai waters, according to the Department of Coastal and Marine Resources. Threats The IUCN Red List assessment found that growing human pressures were contributing to the threats putting whale sharks at an increasing risk of extinction, along with some few other newly assessed animals.

“It is alarming to see such emblematic species slide towards extinction,” said Jane Smart, director of IUCN’s Global Species Programme, in a press release.

The new assessments emphasise how urgent it is for the conservation community to act strategically to protect the diversity of life, she said in the release. Their numbers have been halved over the last 75 years, according to the assessment, as the giant continued to be both fished and accidentally killed by ship propellers. Large-scale fishing of whale sharks had been ended by some countries in Asia, including India, the Philippines and Taiwan, the assessment noted. Yet they continued to be fished in other locations, including southern China, where they are often caught along with tuna as the two species are often found together.

In Thailand, they are also often caught as “by-catch” when other species are being targeted, a trend that worries Petch, who wishes to see it stop. 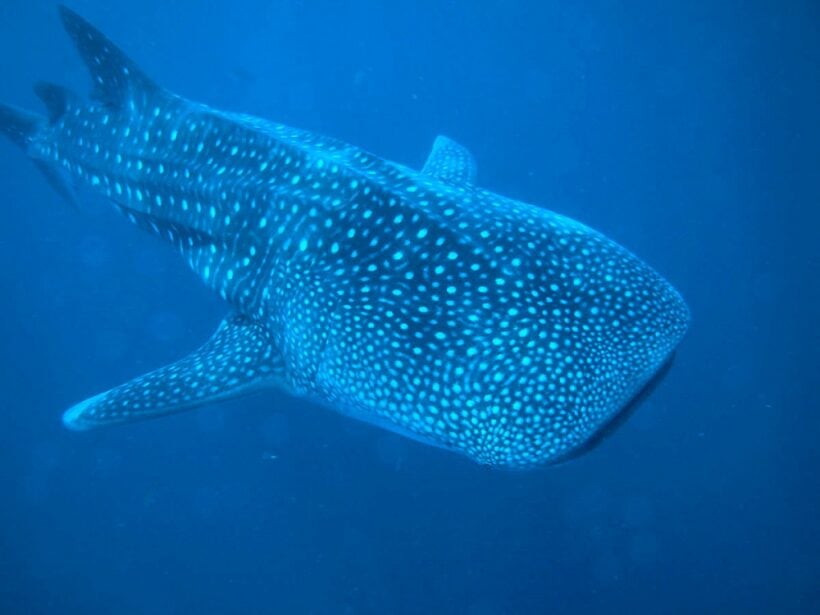 Whale sharks were once widely prevalent in Thai waters and were a tourist attraction, especially for scuba diving, for more than 20 years. Realising their importance, Thon and his fellows pushed for the setting up of a group called Raksa Whale Sharks to help protect the species. They also managed to push for their inclusion on a fishery prohibition ban list of the Fisheries Department. The fish were later listed as a protected species under the wildlife conservation law, according to Thon, a member of the national reform committee on natural resources and environment committee.

Whale sharks, still, have been under threat, often being hit by boats, contaminated by microplastic, or fished inadvertently or by-catching. Petch said by-catching was still considered a major threat to the species as there have been continued reports over the incidents. As long as there was demand for their parts, including their fins, they would continue to be taken although fished inadvertently, he said.

“The issue is a reflection on non-selective fishery because the fishing gears used in the activity, particularly trawling nets, are too effective in gathering everything that comes in their way. So, it is necessary for concerned authorities to come up with better regulation of this activity.

“I wish to see the latest whale shark incident as the beginning of what I call sustainable fishery. This is actually in line with the Sustainable Development Goal 14 concerning sustainable use and conservation of marine resources,” said Petch, adding it was possible, given the country is now under pressure over the IUU, or Illegal Unreported and Unregulated Fishing.

“It’s like you have a diamond in your hands, so you should take this opportunity to take care of it,” said Petch. Thon agrees that by-catching still poses a critical threat to the species. He pointed out that fishery regulation has been improved and that’s the reason why the trawler was seized following the alert from a satellite-based Port in-Port out reporting. By-catching, he said, must be punished under the law. Personally, Thon wished to push for more stringent listing of the animal to ensure they would be better protected. Thon wants to see them included as a preserved species after the Cabinet endorsed the proposal two years ago. 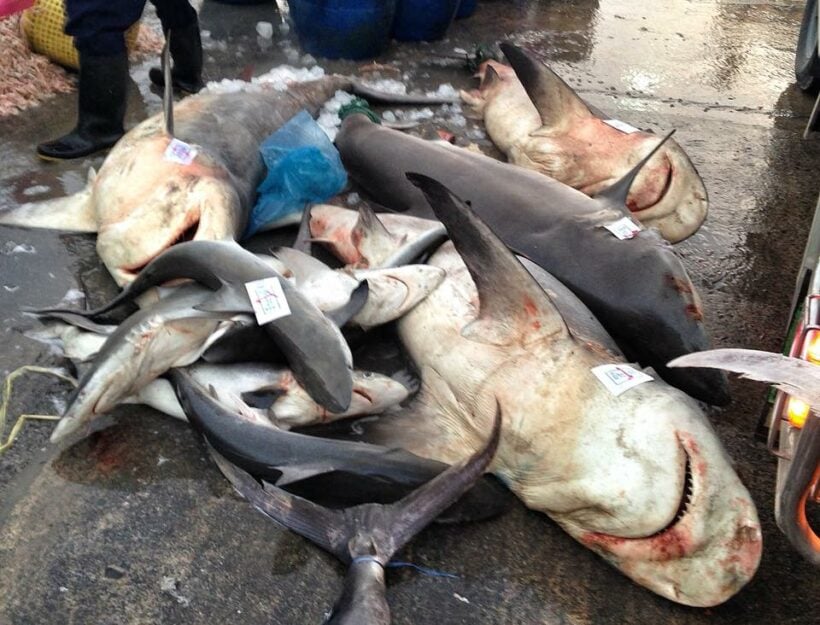 “It’s another goal that, say, we want to preserve them just like what international community does, like IUCN and CITES,” said Thon.

According to the IUCN, one-fourth of the shark species on record worldwide – nearly 300 of 1,041 species – are threatened with extinction. These species have been variously classified as vulnerable, endangered, or even critically endangered, including Whale Sharks. Mediterranean and Thai waters are where the shark population has declined at the highest rate, IUCN noted in its recent report.

The latest research – a collaboration between Thai researcher Sirichai Arunrugstichai of the Prince of Songkla University’s Department of Biology and his fellows – confirmed the trend was happening in Thai waters. Their work, published in the Fisheries Society of the British Isles’ Journal of Fish Biology in February this year, examines the composition and biological aspects of sharks caught by Thai commercial fisheries in the Andaman Sea.

The researchers looked through the by-catches (those species caught inadvertently) by fishermen at several main ports over a year, and discovered a sharp decline in the shark population. They also detected shifts in the population composition compared to a previous study in 2004. They managed to count 2,123 sharks, and recorded only 17 species, compared with 64 species previously reported. The current study revealed noticeable declines in the landings of slow-growing, late-maturing, and low-fecundity species, including the Bull Shark. The absence of many species and changes in life-stage composition, they pointed out, suggested that the populations of these groups might be “close to collapse”.