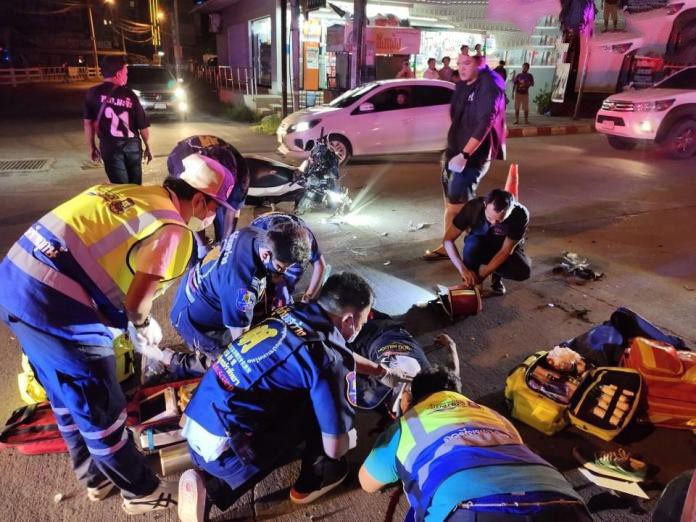 A local motorcyclist was seriously injured after running a red light and slamming into a sedan at the Paniad Chang intersection in the Banglamung district of Chonburi this morning.

Officials from the Pattaya City Police and rescuers were informed about the road accident involving a motorcycle and a sedan and arrived at the scene around 2:00 AM today, September 20.

The white motorcycle was seen heavily damaged with its spare parts scattered on the road while the left passenger side of the private sedan was reportedly damaged from the high-speed crash.

The male motorcyclist, whose name and age was not disclosed to the press, was found lying on the road and critically bleeding. Rescue volunteers then immediately performed  first aid before urgently transferring the injured man to a nearby hospital.

Local witnesses told Pattaya police that the accelerating motorcycle was coming in a straight direction at high speed and ran through the red traffic light at the Paniad Chang intersection. The motorcycle driver suddenly crashed into the sedan which was attempting to make a right turn.

The body of the young driver then reportedly bounced onto the ground, suffering significant injuries. Good Samaritans then hurriedly called the authorities to report the shocking incident.

Initially, the female car owner, Chanatphim Theephopphokkhasap, 29, was taken to the police station for a routine investigation and to reveal her dashcam footage to the officers. The traffic police would also examine the surveillance cameras at the scene to investigate the incident while the injured motorcyclist was being treated at the hospital. Ms. Chanatphim was not injured in the accident. 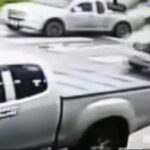