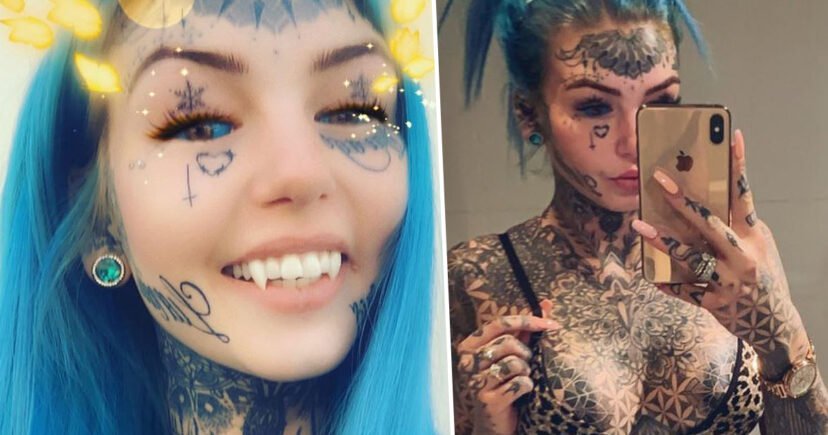 A woman who spent $26,000 on body modifications to look like a dragon girl has flaunted her new fangs.

The self-proclaimed ‘Blue Eyes White Dragon,’ Amber Luke, currently has 130 tattoos – including her blue tattooed eyeballs and the word ‘savage’ inked below her eye.

The body piercer, 24, also has her tongue split and earlobes stretched, most recently purchasing a set of acrylic fangs so she could insert them into her mouth and ‘pierce skin’.

Amber, from the New South Wales Central Coast, Australia, became fascinated with tattoos at the age of 16 before she started experimenting with extreme body modifications.

Recently travelling to the US to purchase some fangs, the 24-year-old told Daily Mail Australia:

They’re very sharp, sharp enough to pierce skin. I love the look of them, it’s so aesthetically pleasing. I decided years ago that I wanted vampire fangs. I knew I wanted them to be a part of my look.

I had connections so I only paid $100 for a set of fangs. No downside whatsoever. They’re easily removable and one day I’ll be getting permanent ones.

Earlier this year, Amber shared a picture of herself as a 14-year-old schoolgirl, saying she ‘hated every aspect of herself’ at the time.

At 14, Amber was diagnosed with severe clinical depression and says she ‘didn’t know who she was’ or what she wanted from life.

I absolutely hate the way I used to look. It wasn’t me. But I’ve evolved myself over the years into what I want to be and look like, but in saying that, I still have a long way to go.

Back when I was 14, I didn’t know who I was or what I wanted from life. I was catatonic and couldn’t see what was best for me. I was naive.

But I now have a backbone and I can stand up for what I believe in. I also have the confidence to look how ever I want to.

Amber says she’s currently in Melbourne in the hope of getting further body transformations, and is planning on getting tattooed by at least four different artists in the space of a week.

She’s also planning to do four sessions of EMSculpt on her stomach and bum, which is apparently the equivalent to 20,000 crunches or squats. Where do I sign up?!

The body piercer ideally wants to be ‘fully covered by the end of next March,’ saying she’s travelling to America next month where she’ll be getting ‘fully covered and getting silver grills in the shape of two fangs for my canine teeth’.

The 24-year-old also says she isn’t worried as to what she’s going to look like when she’s older, stating ‘everyone ages and I don’t think anyone will be looking too ‘pretty’ at 70 years old. 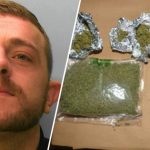 Dealer Caught After Stamping His Nickname On Drugs 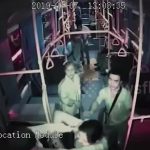