A woman who allegedly killed her father by stabbing him in the head and slashing his penis is being checked for mental illness and drug abuse.

Thung Song Hong police station sent Boonyada Chanchuang, 28, who is suspected of killing Kasem Boonyachon, 58, to hospital after her arrest, a source said.

When asked her about her motive, Ms Boonyada said, “I did nothing wrong. I was abused by my father all the time,” the source said.

On Tuesday night, Kasem’s body was found while Ms Boonyada was reported missing. She was later found wandering on a roadside in a nearby area. Security camera footage from a convenience store showed she dropped a knife in a bin in front of the shop.

Pol Lt Col Surin Phoorit, deputy superintendent of the station, said yesterday police tried to establish what happened before the murder but came to no conclusion as Ms Boonyada was exhausted and her “account was not understandable”.

Meanwhile, the 52-year-old mother of the suspect, identified as Ms Jearanai, reported to the station so she could visit her daughter and said she intended taking the dead body for religious rites.

She said her daughter had shown mental illness symptoms since 2017 before she received treatment the following year. However, the symptoms apparently returned in April.

Ms Jearanai added she and Kasem split when the suspect was young and Ms Boonyada stayed with her. When she was in Grade seven, her husband asked to take care of her but often violently scolded her.

“He had a bad temper and this may have hurt her immensely,” she said.

She said when Ms Boonyada finished Grade 9 her boyfriend’s influence “led her to drug use until her mind was broken” and she never returned to a normal state.

When Ms Boonyada grew up, she left her father to live on her own but no one knew where she lived.

In addition to drug use, her 10-year-old daughter’s sexual abuse by her husband aggravated her illness and damaged her health, Ms Jearanai said.

“She is the daughter of the offender. No mother can bear it,” she said. 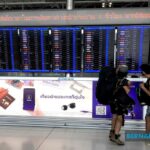