A young woman drowned and a man is missing after they were caught inside Prague’s drain system by torrential rains while participating in a global GPS-based treasure hunt, police said Sunday.

They were among a group of four people “geocaching” — using their smartphone’s GPS to search for little treasures hidden all over the world — when the rapidly rising water from the storm trapped them in the Czech capital’s underground drainage system on Saturday night.

“A woman was found dead in the Vltava (river) and a man is still missing,” police spokesman Jan Rybansky told AFP. The sewer system drains into the Vltava.

The identity of the 27-year-old victim has not yet been confirmed by the coroner.

The other two members of the group managed to escape and were hospitalised, the police spokesman said, and the search for the missing man resumed on Sunday.
The Nation 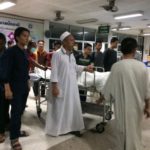 Truck driver flies through the air to his death