An official on Wednesday confirmed two police auxiliaries beat up a motorcycle crash victim inside a hospital in Chonburi province earlier this month.

The officers were “reprimanded” for the assault, which was captured in CCTV footage that went viral yesterday, according to local administrator Pakasit Sueksongkram. Pakasit said the assaulted victim refused to stop at a checkpoint earlier and crashed into one of the police volunteers manning the barricade, seriously wounding him.

“I reprimanded them and told them that they should think before doing anything, because they are security officers,” Pakasit said, without naming the two men.

Police volunteers, or arsa, are civilians who typically support the main police force in tasks like manning checkpoints, patrolling, and directing traffic.

In the video, a group of policemen and police volunteers are seen standing around a man resting on a bed in an emergency room. Two of the volunteers then curtain off the bed and appear to punch the man repeatedly.

The video surfaced on the internet yesterday and drew numerous negative comments aimed at the two police volunteers. Pakasit said the incident took place on Aug. 18 at Burapha University Hospital.

Pakasit said the man was a member of a street racer gang, or dek van, who struck a police volunteer with his motorcycle and left him with two broken legs. The alleged gang member was also brought to hospital for non-serious injuries, where the volunteer’s friends caught up with him, according to Pakasit.

He added that the Chonburi district chief and the provincial governor have been informed of the assault, and may issue additional punishment to the two volunteers.

Speaking to Channel 3 in an interview, Burapha University Hospital director Suriya Prongnamjai said his staff, who were mostly women, were too intimidated to intervene.

Suriya added that medical personnel told the police and volunteers not to enter the emergency room, but to no avail.

“The staff themselves were frightened and demoralized,” the hospital director said.

Police spokesman Krissana Pattanacharoen said the two men seen punching the patient were not enlisted police officers, but added that a fact-finding committee would be convened to determine what happened.

“Although the assaulted man was a suspect, the police have no right to harm him,” the spokesman told reporters.

Col. Krissana also said the hospital is welcome to file criminal charges over the trespassing.

Once considered a sanctuary by law enforcement and criminal elements alike, medical facilities have become the settings of scuffles and assaults in recent months.

In May, at least 19 people were arrested for a gang fight at a hospital in Korat. Nine people were also arrested on similar charges a month earlier in the same province. 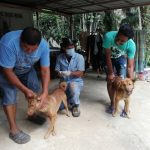 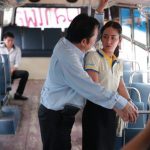