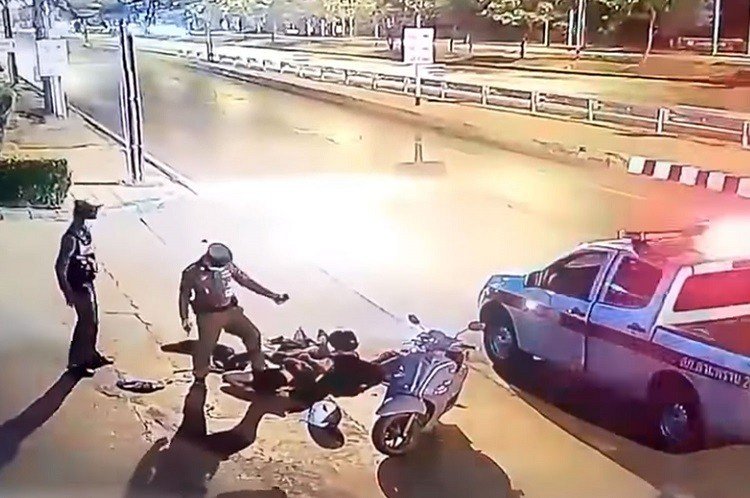 Two police officers in Nakhon Pathom face an investigation after a video showing one of them kicking two handcuffed teenagers, stomping on their heads and beating them with a belt went viral online.

Police authorities in the province adjacent to Bangkok ordered the officers transferred to inactive posts pending the outcome of a fact-finding investigation. The incident occurred on April 30 but only came to light when the video surfaced on social media on Friday.

The video of the incident was posted on the popular Facebook page Yak Dang Chat Diew Jadhai Return Part 3.

It described the situation the three young men faced by quoting the Thai proverb nee sua pa chorakhae (escape the tiger, meet the crocodile), an English equivalent being “out of the frying pan and into the fire”.

According to the message accompanying the video, the three teenagers travelling on a motorcycle had gone to seek help from the two police officers attached to the Sam Phran police station after their rivals gave chase with plans to attack.

“But it turned out that the three were handcuffed and forced to take off their shirts. Worse still, (one officer) stomped on the head of one of them, kicked and beat them with a belt. They were being treated not like humans. It’s humiliating,” the poster wrote.

The incident happened on April 30 in front of Pruksa Ville 44 housing estate on Boromratchonnanee Road in Sam Phran.

Accoding to the Facebook posting, the three teens had gone to see their girlfriends in Sam Phran. Along the way, they encountered rivals who allegedly tried to assault them.

This prompted them to speed off, until they saw a police patrol pickup truck on the other side of the road. They went to seek help and tried to explain what happened.

But the officers refused to listen and asked them to raise their arms, sit down and take off their shirts for a search.

The officers found one of them had a gun. One officer then used his foot to stomp on the heads of two of the young men. All three were handcuffed.

The officers then called for more backup. The teens were taken in the pickup to the Sam Phran station for further questioning and legal action.

They were charged with illegal possession of a weapon and carrying it in public without permission.

The actions of the two officers drew a barrage of criticism after the video showing the incident went viral.

Pol Maj Gen Chamchawin said investigators would question the accused officers and if their actions exceeded the scope of their duties, charges would be filed against them.

Investigators will also call the damaged parties in for questioning.

Pol Col Songwut said he felt sorry for the incident and had to admit that he did not take good care of his subordinates, causing damage to the teenagers and the image of the police force.

A video shows two police officers handcuffing three teenagers who rode a motorcycle to seek their help on a road in Nakhon Pathom. One of the officers is seen stomping on the heads of two teenagers. (Video from Yak Dang Diew Jadhai Return Part 2 Facebook page)

‘I’m a sex influencer and have been breaking taboos 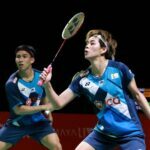