Home » US tourist gets cash back from Pattaya taxi driver

An American tourist, who had forgotten his handbag in a Pattaya taxi on Tuesday, got his cash in dollars and Bt50,000 back on Saturday.

The tourist, John Edward, met and thanked the taxi driver, Prawit Meepian, 48, at Pattaya Police Station at 11am.

Prawit handed over the bag to the station on Tuesday when he found it. The bag had a passport, an ID card, credit cards and cash so police managed to contact the tourist.

Edward said he had taken the taxi to a pier but did not know that he had dropped his bag in the taxi. He said he was visiting Bangkok when Pattaya police contacted him.

He will be in Thailand until June 22. He said he was impressed at the honesty of the taxi driver and would return to Thailand again at the end of the year.
The Nation 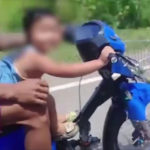 Video: The young netizens teach the little kids to drive the bike.