Authorities have yet to identify a young man whose body was found floating in a public pond in Muang Udon Thani on Monday morning.

Police were called at 6.40am to Nong Sima Pond behind Don Bosco Wittahay School.

No identification documents were found on the corpse, only the key to a motorcycle.

There was a black-ink tattoo of a Japanese cartoon monster on his back.

A doctor estimated the man had died a day or two earlier. There was no sign of an attack.

Thanomjit Kaenbuddee, 67, head of the nearby community, who spotted the body, told police she’d seen the young man lying in a pavilion on the bank of the pond two days earlier. He was not a resident of the community, she said. 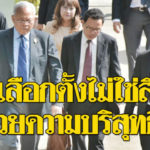