A 16-year-old boy in Jambon, Ponorogo, East Java, burned down his family’s house after his parents told him he would have to wait until after the Idul Fitri holiday to get a new phone.

Jambon Police chief Adj. Comr. Djoko Winarto confirmed the incident on Saturday, saying the boy was angry because his 50-year-old father, Gumbrek, who works as a farmer, did not immediately buy the phone for him.

“The boy asked for a phone, but his parents had yet to buy it for him, so he got angry and burned down his own parents’ house,” he said, as quoted by kompas.com.

The parents said they would buy the phone but that he had to wait until after Idul Fitri. The boy, however, refused to wait. He then brought firewood to the kitchen and set fire to his own house.

Djoko said the boy had once threatened to kill his parents when he asked for a motorcycle.  He was later involved in a fracas with local residents because of his reckless driving, he added.
nation
Please follow and like us: 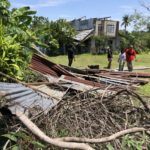