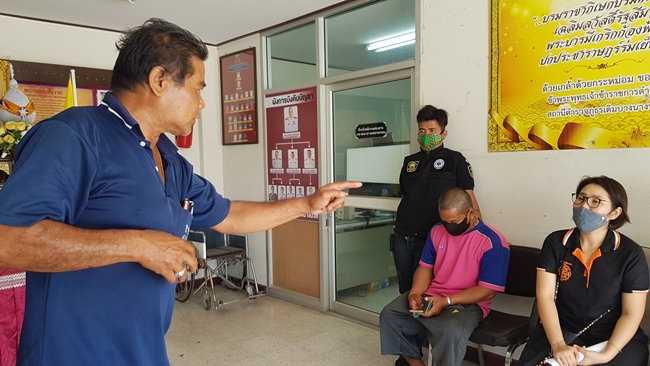 An uncle smashed glass on an officer’s head after he was warned to wear a mask while out in public during these times of Covid-19. Saroch 41 years old the officer from the Khao Phra Municipal Office in Suphanburi Province went to file a report with the Doem Bang Nang Buat Police on 20 May 2020.

Saroch was attacked by Chaloey 59 years old with a ceramic cup and received 2 stitches on his head. Saroch was working as a Covid-19 officer for Khao Phra. He was working alongside officials from the district health office, police, and other related officials.

The municipal went to inspect public spaces including markets, fresh markets, and other locations. The main goal of these inspections is to educate locals and vendors on the importance of wearing medical or fabric masks.

Most vendors understand the importance, especially when they are cooking food for customers and have followed regulations with care. Still, there are some vendors who refuse to wear masks, and officials have no choice but to give these sellers warnings.

On the morning of the 20th, Saroch went out to work as usual. The people have lately been letting their guards down and have a more relaxed approach to the protection of the virus.

Saroch arrived at a cafe in a market and met Chaloey the lottery ticket seller. Saroch had recently warned Chaloey about the importance of wearing a mask.

The lottery seller was drinking coffee inside the cafe. As Saroch walked in he noticed Chaloey pointing a finger while staring at him. Saroch walked towards Chaloey who started calling out the officer stating that he had a big ego and the police were going to hear about what happened.

Saroch tried to explain why he had to give warnings about wearing a mask. Chaloey stood up with a hot cup of coffee and walked towards the road.

Saroch approached the man to further solve their issue, but then the lottery seller held his throat and smashed the ceramic cup into Saroch’s head. The officer fell to the ground and vendors near the area were all in shock.

Chaloey arrived at the station with no mask on. He stated to police that Saroch had warned him about not wearing a mask and how he was threatened to be jailed.

The lottery seller then asked the police if not wearing a mask was such a big deal. People tend to forget and he expected Saroch to tell him nicely. Chaloey admitted that he smashed the cup into Saroch’s head after being asked why he wasn’t wearing a mask. 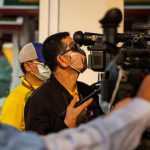 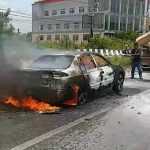 22K THB car goes up in flames on the way home